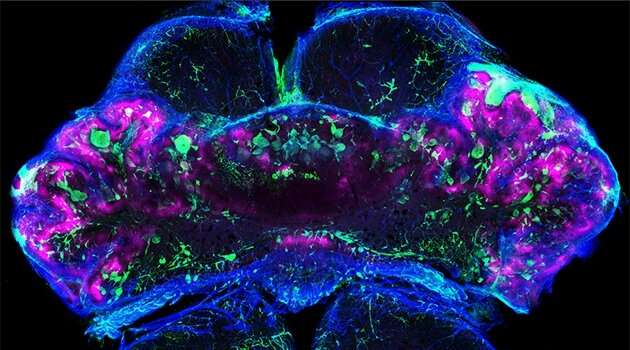 In the condition known as cerebral cavernoma, lesions arise in a cluster of blood vessels in the brain. In a new study from Uppsala University, researchers show that blood coagulation and blood clot formation are very relevant for the disease and that antithrombotic therapy may be beneficial for cavernoma patients.

The vascular lesions, or blood vessel malformations, that appear in a cerebral cavernoma—also known as a cerebral cavernous malformation (CCM)—resemble mulberries. They bleed easily, which may cause epileptic attacks, neurological problems and stroke. For a long time, antithrombotic therapy was not prescribed for CCM patients because of the risk of hemorrhage, but more recent studies show that such therapy does not promote hemorrhage and could even be beneficial.

To determine the role of blood coagulation and the formation of blood clots (thrombosis) in CCM, the researchers in the present study have examined mice with a mutation that results in blood vessel lesions similar to the ones in humans with CCM. They have also examined brain tissues from CCM patients.

“Our experiments have provided several indications that coagulation is an important factor in CCM. In both mice and humans, we discovered blood clots in the vessel lesions. Several genes that are involved in coagulation were also more active in mice with CCM lesions than in control mice,” says Peetra Magnusson, researcher at the Department of Immunology, Genetics and Pathology, who has led the study.

The researchers were able to identify a number of proteins that contribute to coagulation but also some anticoagulant proteins. These proteins were localized in different areas of the lesions, which suggests that some regions are prone to thrombi while others are prone to hemorrhage.

The study also showed that the tissues surrounding the lesions with thrombosis were hypoxic.

“Prolonged exposure to hypoxia may lead to neural cell loss and cell death. We think that this might cause the neuropathological conditions such as stroke,” says Magnusson.