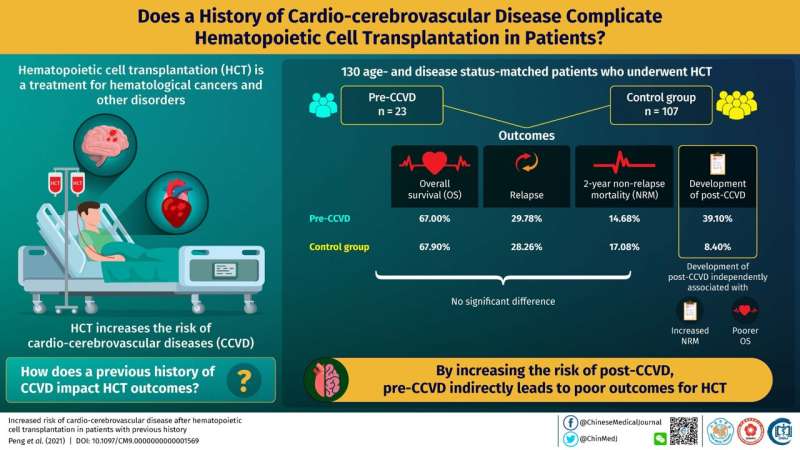 Hematopoietic cell transplantation (HCT) is a recognized treatment option for certain blood and bone marrow cancers as well as some autoimmune and hereditary disorders. Performed to replace or modulate the body’s malfunctioning hematopoietic system (which produces blood cells) or a compromised immune system following a medical condition or treatment, HCT can be autologous or allogenic. In autologous HCT, a patient’s own stem cells are injected into the bloodstream, while in allogenic HCT donor stem cells are used.

Although a difficult procedure, over the years, the safety of HCT has been improved by providing enhanced postoperative support and carefully evaluating the comorbidities of HCT recipients preoperatively. Among the different risk factors for non-relapse mortality (NRM) used to determine the HCT-specific comorbidity index of patients, cardio-cerebrovascular diseases (CCVD)—diseases of the vessels supplying blood to the heart and brain—feature prominently, with an index score of 1. In fact, HCT recipients may experience up to 5.6-fold increased risk of CCVD, including coronary artery disease, cerebrovascular disease, and heart failure, and almost 4.0-fold increased risk of cardiovascular diseases-specific mortality. And the risk of post-transplant CCVD has been shown to increase following both autologous HCT and allogenic HCT.

However, most of the existing research is limited to post-transplant CCVD. As Professor Dai-Hong Liu of The Fifth Medical Center of Chinese PLA General Hospital, Beijing puts it, “Little is known about the relationship between pre-transplant CCVD and the outcomes of HCT.”

To address this gap, researchers in China led by Prof. Liu, conducted a retrospective study on patients receiving HCT between November 2013 and January 2020. Twenty-three patients were enrolled in the study based on their history of symptomatic arrythmia, cardiomyopathy, congestive heart failure, valvular heart disease, coronary artery disease, ischemic attack, cerebral infarction, or cerebral artery stenosis. Constituting the pre-transplant CCVD group, these patients were compared for cardiovascular complications and HCT outcomes with 107 age- and disease status-matched controls who showed no symptoms indicative of pre-transplant CCVD. The researchers reviewed electro-medical records of participants to determine the complications and computed hazard ratios for two primary endpoints—post-transplant CCVD (defined according to the Common Terminology Criteria for Adverse Events version 5.0.) and NRM. As secondary endpoints, the researchers also assessed neutrophil and platelet engraftment, length of stay in the laminar flow ward, relapse, and overall survival. Their study was published in Chinese Medical Journal.

Their findings were interesting. They observed no significant differences in neutrophil and platelet engraftment or relapse between the pre-transplant CCVD group and the control group. The two groups also did not significantly differ in overall survival at the time of the last follow-up. In fact, the cumulative incidences of 2-year NRM were similar between patients with pre-transplant CCVD and the control group patients. However, subgroup analysis revealed that among the pre-transplant CCVD patients, those receiving donor stem cells had inferior overall survival, higher NRM, and longer hospital stay when compared with patients receiving their own stem cells, attesting to the superior safety of autologous HCT over allogenic HCT.

Indeed, a sobering discovery. Prof. Liu explains that their “findings suggest that post-transplant CCVD, which still remains the most important factor affecting transplant outcomes, is promoted by the combined effects of pre-transplant CCVD and toxicity. While the current evaluation system for pre-transplant comorbidities is still reliable, we cannot ignore transplant-related organ injuries and treatment-related toxicities, which may be compounded by pre-transplant CCVD. This is particularly important for allogenic HCT cases.”