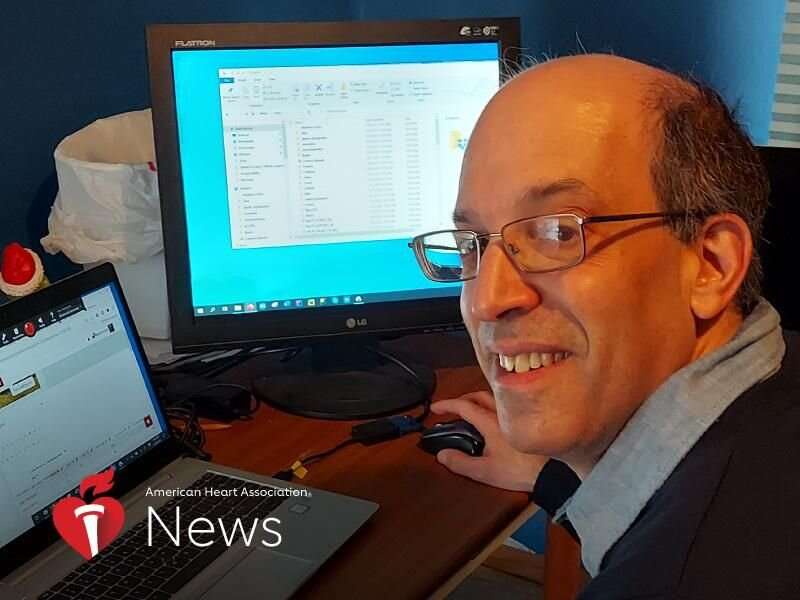 Mark Brodie was sitting behind his laptop in his home office, grading student papers for a mobile applications class he taught at Simpson College in Indianola, Iowa.

Suddenly he couldn’t get his thoughts in order. Everything on the screen and in his mind felt jumbled. He’d never experienced anything like this. He knew something was wrong.

He called down to his wife, Carolyn. Also a professor at Simpson College, she normally would have been at work but happened to be home at that moment.

Carolyn came upstairs and saw that Mark’s face was drooping. He seemed confused but was able to tell her to call 911. By the time he reached the hospital, he was unable to speak.

Doctors performed a series of tests that showed Mark was having a stroke. Because he arrived there so quickly, he was able to receive clot-busting medication.

Mark’s next clear memory came three days later. His only physical issue was minor numbness in his right hand and leg. But he could not speak, spell or type.

He was devastated. What kind of life would a computer science professor have if he couldn’t give lectures or write programs?

Carolyn felt more optimistic. Doctors had told her improvement could come daily and for many months.

The next day, not only did Mark have feeling back in his hand, but speech therapists had already helped him utter a few words.

“I think Mark had a great attitude, even though he says he didn’t, because he was always willing to work with whichever therapist came in—speech, occupational, physical,” Carolyn said. “He never got angry.”

Mark was buoyed by the can-do attitude of his therapists.

“I first started feeling hope not only from the therapy itself, but from the therapists,” he said. “They didn’t promise that I would recover. But the fact that they had hope gave me hope.”

After one week of inpatient therapy, Mark could say several words. He returned home and started outpatient speech and occupational therapy. There was no need for more physical therapy.

Mark could understand what other people said, but struggled to speak, which is called aphasia. He also lacked control of the muscles used to form words, called apraxia.

Mark’s recovery was greatly helped by the presence of his mother, who traveled from South Africa to assist the family, as well as incredible support from the Simpson College community. Also crucial was the use of speech therapy apps.

“I basically had to explicitly do what a child does,” he said. “With one app, I had to repeat words and sounds. I would see pictures and have to guess the word.”

Mark feared he would have to relearn every word he ever knew. Then he was taught a shortcut: The same sounds are used in many words.

“I realized there’s a pattern, like an algorithm in computer science,” he said.

The use of apps triggered an idea for Mark and Carolyn. Maybe they could use his experience to develop an app, one influenced by his experience.

With input from Lisa Raymond, the first speech therapist who gave Mark hope, he and Carolyn have done it. Their product simulates online banking as a way to help people with brain injuries relearn skills such as logging in, transferring money and paying bills. Raymond uses it at two rehabilitation facilities in Des Moines, Iowa.

After Mark’s stroke in November 2019, doctors discovered he had a hole in his heart called a patent foramen ovale (PFO). Everyone is born with the hole, but most close on their own within months. Millions of people have a PFO—most without knowing it—and have no problems. But issues can arise, such as a clot escaping and causing a stroke.

The operation to close the hole was scheduled for May 2020. Of course, the COVID-19 pandemic had hit by then, but he went through with it and is glad he did. He also received an implantable loop recorder to monitor his heart rhythm.

That fall, Mark—with the peace of mind about his heart being fixed and monitored—returned to the classroom. The 55-year-old is back to teaching on a regular schedule.

Although others would not be able to detect he has a speech problem, Mark sometimes struggles to find words, especially in front of an audience.

Spelling and typing remain challenging, too. He combats that by using software that transcribes his speech into writing. He and Carolyn also are working with students on designing more nimble speech recognition programs.

Being partners in work and life, as well as having a similar sense of humor, has helped the couple support each other throughout their ordeal.