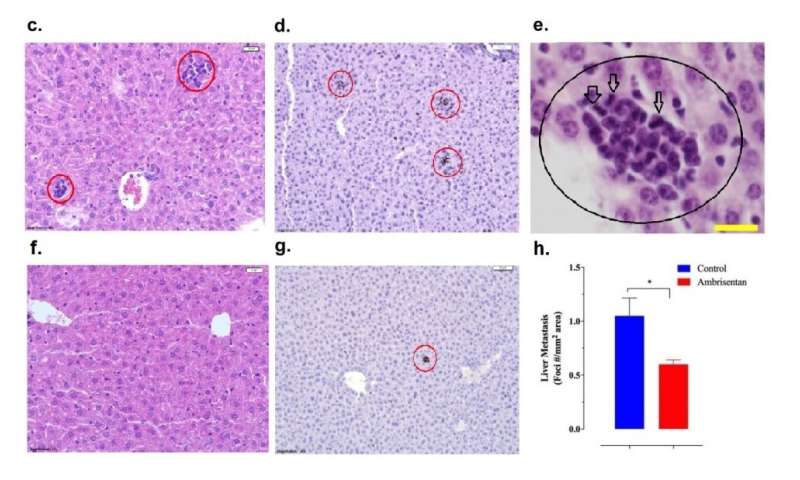 A drug used to treat pulmonary hypertension significantly reduced the capacity of tumor cells to migrate and invade other tissues in trials involving pancreatic, ovarian, breast cancer, and leukemia cell lines. Furthermore, in mice with an aggressive form of breast cancer, the drug reduced the incidence of metastasis in the liver and lungs by 47% and lengthened survival compared with untreated animals.

The study is published in Scientific Reports.

“The drug ambrisentan is an inhibitor of the endothelin type A receptor, which is known to play a role in vasoconstriction, so the drug is used to treat pulmonary hypertension [typically caused by autoimmune diseases such as lupus and systemic sclerosis]. In the laboratory, we found that the drug prevented migration of tumor cells to other tissues and had other effects we’re still investigating,” said Otávio Cabral Marques, a researcher at the University of São Paulo’s Biomedical Sciences Institute (ICB-USP) in Brazil and principal investigator for the study, which was funded by FAPESP.

Marques conducted the study while he was a postdoctoral fellow at the University of Freiburg in Germany, collaborating with researchers there and in the United Arab Emirates. He is currently principal investigator for a project supported by FAPESP via a Young Investigator Grant.

Endothelin type A receptor is expressed in endothelium, the layer of cells that line the inner surface of blood vessels, and in the cells of the immune system. Other research has also shown its involvement in tumor growth and metastasis.

“The effects of the drug appear not to be confined to preventing tumor cell migration, but also to include inhibition of neoangiogenesis, the formation of new blood vessels required to sustain tumor growth,” Marques said. “We’re currently doing experiments to confirm this. If so, the drug must have a systemic effect, preventing tumor migration to other tissues and inhibiting tumor growth by blocking the generation of new vessels.”

The drug’s benefits in cancer treatment have yet to be proven. Its use without a physician’s guidance can be harmful to health, especially in pregnancy.

Next, 4T1 cells derived from the mammary gland tissue of a mouse strain were injected into mice to mimic the initial stage of an aggressive form of breast cancer in humans. The mice were treated with the drug for two weeks before the injection and another two weeks afterward. In this experiment, the drug reduced metastasis by about 43% and enhanced median survival by about 30%.

“Metastasis of 4T1 cells is very fast in mice, so we began treatment earlier in order to approximate what happens in humans,” Marques explained.

Marques is now preparing to perform clinical trials with other researchers at ICB-USP. The drug will be tested on a group of cancer patients undergoing chemotherapy to see if they recover better than the control group that will not be given the drug.