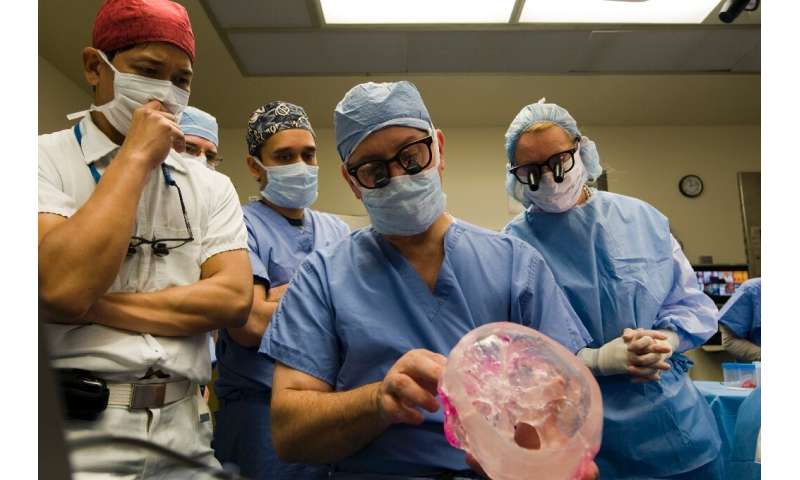 Connie Culp, the first US recipient of a partial face transplant, has died at age 57, according to Ohio’s Cleveland Clinic, where she underwent the delicate operation nearly 12 years ago.

The health center listed no cause of death in its tweet on Friday, quoting one of her doctors, Frank Papay, as saying she was a “great pioneer.”

“Her decision to undergo a sometimes-daunting procedure is an enduring gift for all humanity,” added Papay, head of the clinic’s dermatology and plastic surgery institute.

Culp was grievously wounded in 2004 when her husband shot her and then turned the gun on himself.

The gun blast shattered Culp’s nose and cheeks, the roof of her mouth and her right eye.

His wounds were far less extensive than hers, and he was later jailed for seven years over the attack.

Culp had 30 surgeries before undergoing transplant surgery in 2008 at the Cleveland Clinic—an intensely complex procedure that took 22 hours over two days.

The mother of two went on to speak out about domestic violence and to offer encouragement to others who underwent face transplants, including Charla Nash, the Connecticut woman who was mauled by a pet chimpanzee.

A transplant can help recipients—often victims of accidents, violence or rare genetic disorders—to resume basic tasks such as breathing, eating and speaking, and it restores important non-verbal communication through smiles and frowns.

But the operation, performed around the world only a few dozen times, can mean a life-long struggle to stop the body rejecting the implanted organ.

Immunosuppressant drugs, which help stop such a rejection, can leave the person vulnerable to infections and cancers.

Dallas Wiens, a Texas man whose face was gravely burned by a high-voltage wire while he was working on a church roof, underwent the first US full-face implant in 2011. Though permanently blinded, he is now able to speak on the phone and has regained his sense of smell.

The recipient of the world’s first partial face transplant, Isabelle Dinoire of France, died of cancer in April 2016, 11 years after her groundbreaking operation.