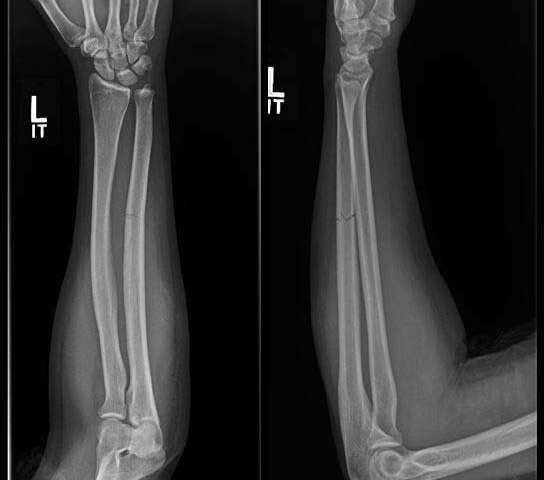 Up to one-third of adult women who sustain a non-displaced fracture to the ulna bone of the forearm may be victims of intimate partner violence, according to a study being presented at the annual meeting of the Radiological Society of North America (RSNA). The findings underscore the need to screen for intimate partner violence in women with these types of injuries, researchers said.

Fractures to the ulna, the bone on the pinkie side of the forearm, often occur when people hold up their hands to protect their faces from being struck with an object. These breaks are referred to as “nightstick fractures,” because they are frequently seen in people who try to block blows from nightsticks wielded by police officers.

Bharti Khurana, M.D., a radiologist at Brigham and Women’s Hospital in Boston and senior author of the study, had observed these fractures in her practice for years, mostly in men. But it was the occasional woman she saw that raised questions.

“I would see these types of injuries in men, but once in a while I would see them in women,” Dr. Khurana said. “I never correlated it with intimate partner violence until recently. I shared my thoughts with our orthopedic surgeons and, with their interest and support, decided to pursue the study.”

Analysis of the radiographs demonstrated that intimate partner violence was strongly associated with minimally displaced fractures.

“The radiological characteristics we were looking at were the location of the fracture, the pattern of the fracture in terms of how it broke, and the displacement of the fracture,” said study lead author David Sing, M.D., an orthopedic surgery resident at Boston Medical Center. “Out of all those things, what we usually saw was a minimally displaced fracture, meaning the bone is broken all the way through but has not shifted significantly.”

Confirmed cases were also linked with homelessness and previous visits to the emergency department with musculoskeletal injuries.

Women with ulnar fractures from intimate partner violence who are reluctant to report the crime will often attribute their injuries to a fall, Dr. Khurana said. However, she noted, falls are much more likely to result in a fracture of the radius, the other bone of the forearm.

“It’s actually rare to break your ulna in a fall,” Dr. Khurana said. “If a radiologist is seeing an ulnar fracture that is non-displaced, and the woman says she had a fall, it’s actually quite concerning for intimate partner violence.”

In the study, for instance, historical imaging analysis alone was able to raise suspicion in 75% of clinically confirmed intimate partner violence patients.

“We have resources that we can provide to the patients who are stuck in that situation,” Dr. Sing said. “It’s especially important during COVID-19, where we’ve seen the rate of intimate partner violence go up with people trapped at home with their abusers.”