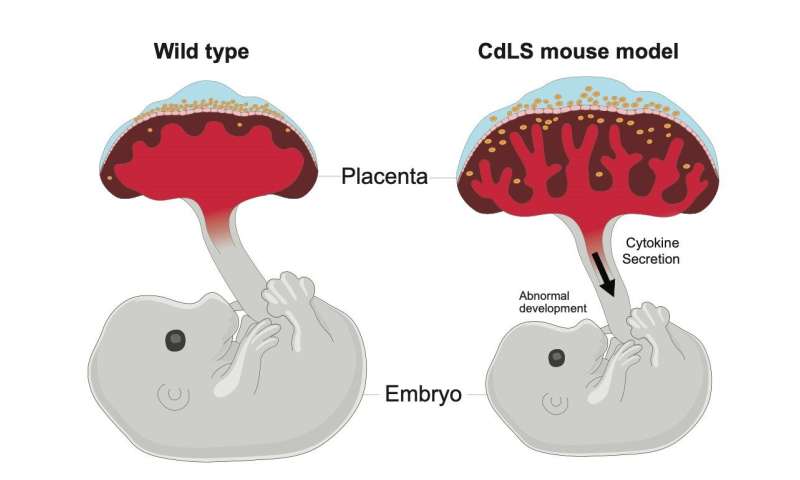 Scientists at the Stowers Institute for Medical Research have shown that a dysfunctional placenta can play a previously unrecognized role during the earliest stages of development in mouse models of Cornelia de Lange syndrome. People with this rare genetic disorder often harbor mutations in cohesins, ring-like proteins that help DNA organize and repair itself.

The researchers found that mice with cohesin mutations had placentas that accumulated damage to their DNA, entered a permanent growth-arrested state known as senescence, and churned out pro-inflammatory cytokines that affected embryonic growth.

The findings, which appear online June 16, 2020, in the journal Developmental Cell, suggest that targeting cytokine signaling may be a way to protect the health of the placenta and promote healthy pregnancies.

“The discovery that DNA damage activates senescence in the placenta has huge implications,” says Jennifer L. Gerton, Ph.D., an Investigator at the Stowers Institute and lead author of the study. “In terms of potential relevance to human health, our research suggests that this could be one mechanism through which things like smoking, which can cause DNA damage and intrauterine growth restriction, might be acting.”

An estimated one in 20 newborns are affected by intrauterine growth restriction, in which a baby is smaller than expected because it is not growing at a normal rate inside the womb. One of the most striking examples of this stunted growth is Cornelia de Lange syndrome, a rare condition that affects one in 10,000 newborns. People born with this disorder can have short stature, intellectual disability, and abnormalities of bones in the arms, hands, and fingers.

Cornelia de Lange syndrome is caused by mutations in genes that affect a complex of proteins called cohesins that encircle DNA and fold it into loops. Scientists have long believed that the syndrome occurs when defects in cohesin complexes throw the organization of DNA into disarray, disrupting the way genes are turned on and off during development. However, Gerton and her team suspected that was only part of the story.

Previous studies revealed that women who were carrying babies with Cornelia de Lange syndrome had lower levels of a protein called pregnancy associated plasma protein-A (PAPP-A). Because this protein is secreted by the placenta, the finding suggested that something might also be wrong with this vital and yet understudied organ.

Vijay Pratap Singh, Ph.D., a postdoc in the Gerton lab, decided to look at what was happening to the placenta in mouse models of Cornelia de Lange syndrome. He found persistent damage to their genomes, underscoring an important but understudied function of cohesins in repairing DNA damage. These maintenance issues sent the placenta into a premature state of senescence, where its cells stopped dividing.

Singh showed that as the cells of the placenta shifted into senescence, they began secreting chemicals known as cytokines that initiate the inflammatory response, like flares to signal danger. These cytokines accumulated in the embryonic mice, affecting their growth and health.

“There is an old saying that during pregnancy, any kind of stress can affect the baby’s growth. Here, using mouse models, we have shown on a molecular level how DNA damage can affect embryonic growth through cytokine signaling,” says Singh, who was first author of the report.

In the future, the researchers plan to test whether they can also generate better outcomes in mouse models of the syndrome with small-molecule drugs that block pro-inflammatory cytokines in the placenta. Gerton says it is possible that such anti-inflammatory drugs could one day improve pregnancy outcomes, but more research is needed.