The secret ingredients to longevity may be the simple life.

Saturnino de la Fuente García died on Tuesday morning in his home in León, Spain as the oldest living man at 112 years and 341 days old, just days before his 113th birthday, according to a Guinness World Records report.

Right after breakfast, he ” … began to breathe heavily, and in a few seconds he went out like a candle,” his son-in-law, Bernardo Marcos, told United Kingdom news outlet The Times.

Known as “El Pepino,” which is an abbreviated version for Peña, the name of his mother, he was born in the neighborhood of Puente Castro, León, on February 11, 1909, Guinness reported.

He survived the 1918 Spanish flu pandemic and later married Antonina Barrio Gutiérrez in 1933, with whom he had 7 daughters and one son, who died as a child, according to Guinness.

He was cobbler by trade, but started working in a shoe factory at the age of 13, according to USA Today.

Less than five feet fall, he told Guinness in a previous interview that he used his short height to evade enlisting in the 1936 Spanish Civil War, opening a shoemaking business during the war instead, using his craftsman skills to make army boots and eventually becoming a famous artisan in his town. 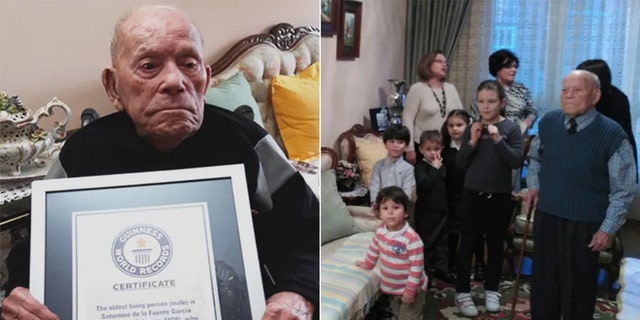 He thought the secret to his long life was simple: “A quiet life… and do not hurt anyone,” he said.

He died of natural causes and was to be buried on Wednesday in a local cemetery, according to Spain’s state-run news agency EFE.