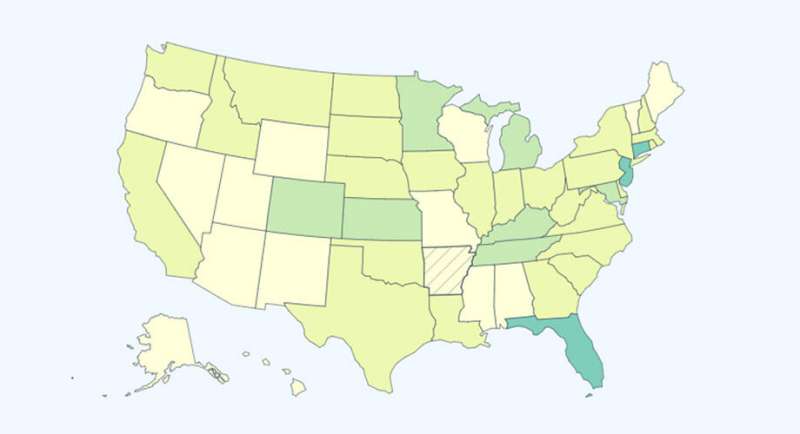 The faster-spreading B.1.1.7 variant of SARS-CoV-2 first detected in the United Kingdom, the coronavirus that causes COVID-19, is quickly on its way to becoming the dominant variant of the virus in the United States, according to a study from scientists at Scripps Research and the COVID-19 test maker Helix.

The findings, which appear today in Cell, suggest that future COVID-19 case numbers and mortality rates in the United States will be higher than would have been otherwise. The analysis suggests that the variant, which has been detectable in an increasing proportion of SARS-CoV-2 samples, is 40-50 percent more transmissible than SARS-CoV-2 lineages that were previously dominant. Other studies have found evidence that the B.1.1.7 variant may be about 50 percent more likely to cause fatal COVID-19.

“B.1.1.7 rapidly became the dominant SARS-CoV-2 variant in the U.K. and other countries after its emergence late last year, and the U.S. is now on a similar trajectory,” says study co-senior author Kristian Andersen, Ph.D., a professor in the Department of Immunology and Microbiology at Scripps Research and director of Infectious Disease Genomics at the Scripps Research Translational Research Institute. “We need immediate and decisive action to minimize COVID-19 morbidity and mortality.”

In addition to Andersen, the other senior author was William Lee, Ph.D., vice president of science at Helix, which provides PCR-based COVID-19 testing to organizations across the United States. The study was also authored by Nicole Washington, Ph.D., associate director of research at Helix, and Karthik Gangavarapu of the Andersen Lab.

“B.1.1.7 has a doubling rate of a little over a week and an increased transmission rate of 40-50 percent, which means it could have a meaningful impact on public health,” says Lee. “It is critical that we continue to monitor the spread of this and other emerging variants, but our current level of surveillance is inadequate and lags behind that of other countries. We need a more comprehensive national SARS-CoV-2 genomics surveillance program to address this.”

The B.1.1.7 variant emerged in southern England last year and has since become the dominant variant in the U.K. In December, Andersen’s team at Scripps Research with colleagues at University of California, San Diego confirmed the first evidence of the variant in California.

A pattern of dominance

The B.1.1.7 variant contains several mutations, including several in the gene that encodes the viral spike protein. These mutations increase the spike’s ability to bind to the ACE2 receptor on human cells. Although there is no evidence yet that the B.1.1.7 variant can evade COVID-19 vaccines, public health officials fear its relatively high rate of spread will significantly worsen the pandemic before vaccines can end it.

Standard swab tests for the coronavirus check for distinctive genetic sequences at three sites on the viral genome; the B.1.1.7 variant, due to its mutations, shows up as positive for two of those sites, but negative for the third site, which is within the virus’s spike gene.

The new analysis of roughly 500,000 Helix test results since July 2020 revealed that this two-of-three pattern, known as S-gene target failure, or SGTF, became consistently evident at a low frequency (0.2 percent) in mid-October. By the third week of February, it had risen to a frequency of 10.6 percent and was detected in patients from 25 different U.S. states and territories.

The SGTF pattern can occur with other SARS-CoV-2 variants that have spike gene mutations, but the researchers found by sequencing every SGTF sample they had from December through February, 662 of the 986 samples (67 percent) contained the B.1.1.7 variant. This suggests that the SGTF pattern on the swab tests can provide a quick albeit rough indication of B.1.1.7 prevalence.

Variant entered the country many times

The analysis also indicated that B.1.1.7 since December has accounted for a rapidly rising proportion of SGTF results—for example, reaching about 95 percent in California by mid-January. In addition to the 659 B.1.1.7 cases they detected via the SGTF method the researchers found three other cases of the B.1.1.7 variant among samples gathered as part of unbiased SARS-CoV-2 genomic surveillance efforts in California.

The 662 instances of B.1.1.7 sequenced in the study were from samples gathered in 10 U.S. states, although the researchers note that other testing labs covering a total of 33 U.S. states and territories have by now reported to the CDC at least one B.1.1.7 case.

The researchers’ family tree-type analysis of the detected B.1.1.7 sequences show the variant has been introduced to the U.S. multiple times since at least late November 2020, especially in California and Florida, and in periods coinciding with increased travel, including Thanksgiving week.