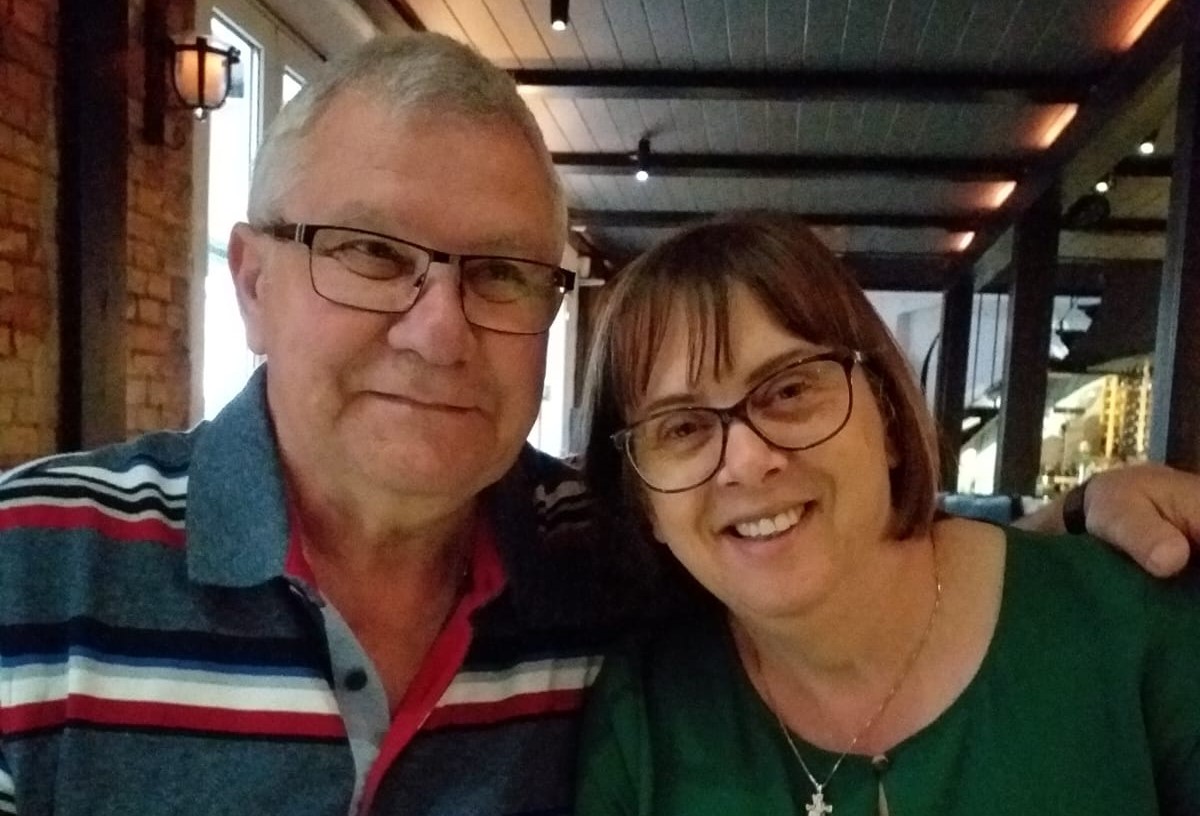 I noticed weight creeping on around my stomach when I was in my early 40s.

Normally a size 14, my clothes started becoming tighter around my middle. I wasn’t eating any differently, but my stomach was growing.

‘I must be going through the menopause,’ I told myself.

I spoke to a doctor who also told me that’s what it was and so I put my other symptoms – hot sweats, dry skin, brain fog and anxiety – down to The Change.

Then, about a year before I turned 60, I began struggling with a leaky bladder too. It was usually in the night and when I coughed or sneezed. Again, I thought it was another menopause symptom.

But then when I turned 60, in June 2020, my husband, Phill, noticed that my tummy looked a funny shape – heavier at the bottom, a sort of pear shape. And although my arms and legs were very thin, my tummy was still growing larger.

Although I was concerned, I didn’t think it was worth getting medical advice. Which, looking back, was silly.

In July 2020, I had a routine blood test at my GP surgery and the results came back, informing me that my haemoglobin levels were low, so it needed investigating.

I got a phone call from my GP who said he wanted to see me, and that same day, I had my blood tests repeated.

I didn’t worry too much – until my GP said I had to go to Lincoln Hospital for an ultrasound scan in a couple of days’ time. I was worried but overall relieved that they might be able to get to the bottom of the symptoms I’d been experiencing for nearly 20 years.

The day after my ultrasound, my GP rang me at 8am to say there was something in my ovary and they needed to investigate the possibility of ovarian cancer. Relief turned to fear, which was compounded by the fact that I had to go to every appointment on my own because of the Covid restrictions.

Waiting for results was awful. Every day I was readying myself for news that never came. I’d flit between thinking, ‘If it was really bad, I’d have heard by now’ and ‘Maybe it’s so bad they have to get another opinion’.

After four weeks, the results came back showing that the scan found what they thought was a mass on my ovary. More investigations followed and I had fluid drained from the mass.

The doctor warned me that it could be PMP, or Pseudomyxoma Peritonei – a rare cancer that starts growing on the appendix – but that they’d only ever had one case of it in Lincoln before. It was soon confirmed.

A lump formed in my throat when a consultant confirmed it had already spread to my stomach.

Thankfully, he said that my prognosis looked as good as could be but we wouldn’t know properly until after I’d had surgery to remove the cancerous cells. I needed two major operations, then I’d be closely monitored for the next 10 years.

It took a while for the news to sink in but, back at home with Phill and our daughter Sarah, 29, I broke down in tears. They were shocked but supported me by being positive and refusing to let me wallow – instead repeating what my doctor had said: that he thought it was treatable.

I had a de-bulking operation, which involved draining liquid out of my abdominal cavity. They told me afterwards they’d drained five litres and I’d lost two stone in the process. No wonder my stomach was so swollen.

They also removed my appendix, where the cancer had started, and my right ovary, because it had a large cyst growing on it.

After the operation the doctor explained that I had probably had a burst appendix at some point in the past, which may have caused the cancer to spread.

I spent five days in Manchester’s Christie Hospital before coming home to rest.

But six months later, in April, I returned to hospital for major surgery – this time I faced a nine-hour operation to remove my spleen, gallbladder, belly button and other ovary.

They also scraped my liver to remove rogue cells and filled my tummy cavity with hot chemo fluid to get rid of any remaining cancer cells. I was very scared about how the chemo would affect me because I’d never heard of it being done like this before.

As I opened my eyes, groggy, post-surgery, I immediately clocked the huge scar from my breast bone to my public bone. I could barely stomach looking at it, and when I did touch it, I’d feel incredibly sad. With my belly button removed, I felt my stomach looked like the top of a pumpkin.

I stayed in hospital for two weeks to recover and in that time, I couldn’t eat a lot.

Thankfully, all my procedures worked to clear the cancer, but I am still taking medications that I will likely be on for the rest of my life.

I now have scans and blood tests every six months to ensure the cancer hasn’t come back. I suffer from extreme fatigue but I feel stronger for what I’ve been through and grateful to have the support of Phill and Sarah.

I now know that I did go through the menopause, as my periods have stopped, but I still don’t know which of the symptoms I experienced were actually caused by that and which were down to the cancer.

I still can’t believe that for all those years, I thought I was just experiencing menopause symptoms when in reality, I was being attacked by an extremely rare cancer.

So now I’m telling my story to raise awareness of PMP and the support I’ve received from Pseudomyxoma Survivor Charity. Thanks to them I’ve been introduced to a whole network of survivors like myself.

Often women try to carry on as normal when they’re feeling ill or experience differences in their body, especially if they are at an age in their life when they think it’s the menopause.

However, I’m proof that no matter what you think it is – it’s always best to get a second opinion from a medical professional.

As told to Rachel Tompkins