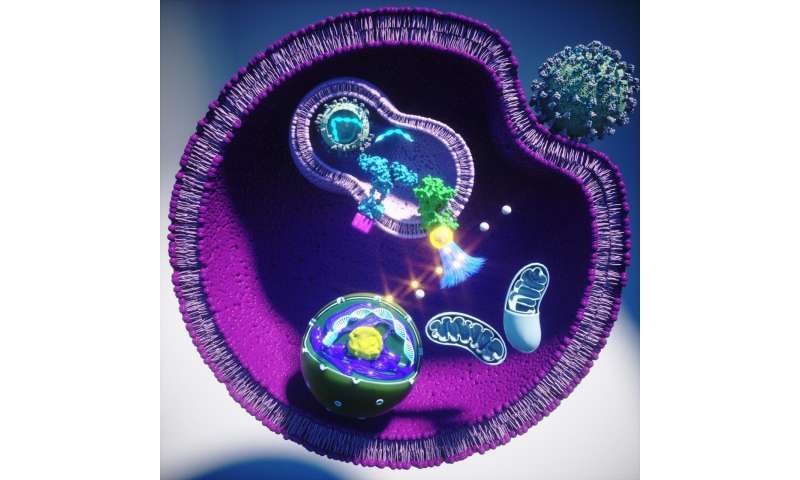 How cells recognize pathogens and alert the immune system swiftly is a fundamental process of high importance for the survival of any species, including humans. A key role is ascribed to so-called adapters—little molecular platforms inside cells where signals from pathogen detectors are integrated for safety and accuracy and conveyed to lasting signals leading to the activation of the major “red alarm” genes, like interferons.

Researchers from the lab of Giulio Superti-Furga at the CeMM Research Center for Molecular Medicine of the Austrian Academy of Sciences in collaboration with Boehringer Ingelheim have identified a new key element of the multi-component machinery that is responsible for sorting out the nature and severity of the pathogen challenge.

The new protein, named TASL, is indispensable for the signaling of so-called Toll-like receptors (TLR) in the endosomes leading to activation of the gene-activator IRF5 in certain immune cells. Sensitive ‘tuning’ of the machinery is highly important as too much output causes inflammation also in the absence of the pathogen, as occurs in auto-immune diseases. This particular version of the machinery seems particularly associated with disorders such as systemic lupus erythematosus (SLE).

This discovery highlights a potential new target for the development of drugs to treat certain autoimmune diseases and possibly also overreaction to viral and other infections, and has been published in the renowned scientific journal Nature.

The immune system is the body’s natural defense system and is made up of a network of cells, molecules, tissues, and organs working together to protect the body against infectious agents, such as viruses, bacteria or pathogenic fungi. The immune system is equipped with a sophisticated repertoire of sensing mechanisms which detect these pathogens and orchestrate an appropriate immune response. Autoimmune diseases originate when the immune system loses the ability to differentiate between itself and other foreign bodies.

Previous studies revealed that SLC15A4, a member of the body’s biggest family of transporter proteins, was known as an essential component required for the correct function of these TLRs. Based on their strong research interests in pathogen-sensing by the innate immune system and the characterization of solute carriers, researchers in the group of CeMM Scientific Director Giulio Superti-Furga set out to investigate how SLC15A4 influences the ability of TLRs to sense pathogens, and, consequently, gain a better understanding on its implication in autoimmune conditions, and in particular SLE.

In their study, first author Leonhard Heinz and the team, including Boehringer Ingelheim researchers in Ridgefield, undertook a precise investigative work, not taking for granted previous findings on SLC15A4 and the connection to this group of specially located TLRs. They painstakingly determined by biochemistry and mass spectrometry the molecular interactions that involved SLC15A4. This led to the identification of an uncharacterized protein CXorf21, belonging to the functionally orphan genes that are merely numbered and assigned to the chromosome of origin. The gene, like SLC15A4, had been previously loosely associated with SLE.

The team demonstrated that the interaction between TASL and SLC15A4 was crucial for the localization and function of the TASL protein and could pinpoint the precise involved portions of both proteins. A eureka moment for the understanding of the protein came with the observation that TASL harbors a specific motif essential for the recruitment and activation of IRF5. “After STING, MAVS and TRIF, the new protein TASL is the fourth key innate immunity adaptor functioning as a platform for the encounter of a kinase and a gene activator of the IRF family,” says Manuele Rebsamen, CeMM senior postdoctoral fellow and project leader of the study.