A team of researchers from Shoolini University, Himachal Pradesh, India have discovered a psychrophilic bacterial strain, called Rhodonellum psychrophilum GL8, at the high altitude Pangong Tso Lake in the Himalayas. The red pigment isolated from this bacterium possesses antimicrobial, antifungal, and skin cell growth stimulating properties. This novel bio-pigment promises to be useful for the development of antimicrobial smart fabrics, medicated bandages, and natural food coloring and preservatives. 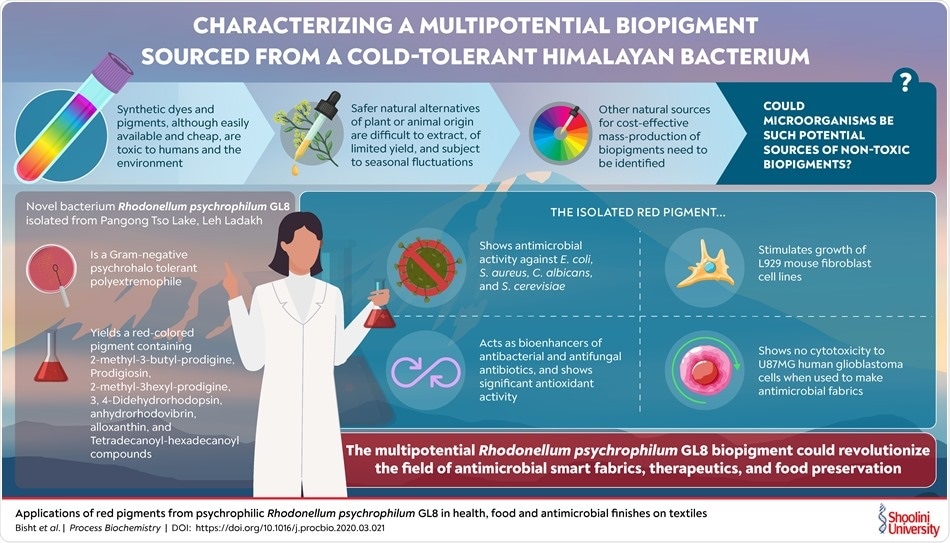 Dyes and their vivid colors have fascinated humankind even beyond recorded history. Archaeology offers evidence of dyeing of garments in the Bronze Age and during the heyday of the Indus Valley Civilization. Prior to the Industrial Revolution, the world relied on natural dyes sourced from plants such as indigo, turmeric, saffron, beans, and paprika. The Industrial Revolution brought with it synthetic dyes that were much cheaper and readily available for use in the cosmetics, textile, pharmaceutical, and food industries. But a side effect of this wanton application of synthetic dyes has been the steady contamination of our soil and water with the toxic chemicals released from these artificial products.

In recent decades, people have become aware of the negative effects of synthetic colorants and the demand for naturally occurring non-toxic dyes has been increasing by 10–15% annually. In their search for eco-friendly bio-colorants, researchers have identified microbes as potential sources of pigments that promise to be environmentally friendly and economical, besides being non-toxic, inexpensive, and readily available. Another advantage of using pigments of microbial origin is, unlike certain plant or fruit dyes, their production is not dependent on seasonal fluctuations, and, given the right growing conditions of the microbes, they can be mass-produced like synthetic dyes!

So where does one look for these color creating critters? According to a team of researchers from Shoolini University, India, in some of the most unimaginable and inhospitable environments, it seems! Led by Professor Kamal Dev from Shoolini University’s Department of Biotechnology and Microbiology, the team has discovered a novel strain of a Gram-negative extreme cold-tolerant species of bacterium from the freezing waters of the Pangong Tso Lake in the Himalayas, which produces a brilliant red pigment.

Synthetic molecules are slowly being replaced by biological ones with diverse functions. The Himalayas hold within it a unique heritage of biological diversity. The overall objective of this study was to characterize the production of pigments by the microbes of high-altitude lakes in Northwest Himalayas for solving the emerging problems of health, food, and environment. In our quest, we isolated and characterized a red pigment producing strain of Rhodonellum psychrophilum.”

The researchers confirmed the novel status of this strain of Rhodonellum psychrophilum, which they called ‘GL8’, through phylogenetic analysis, and subjected the isolated pigment to chromatographic and spectrometric techniques to identify the constituents. They found that the red pigment extracts contained a mixture of 2-methyl-3-butyl-prodigine, Prodigiosin, 2-methyl-3hexyl-prodigine, 3, 4-Didehydrorhodopsin, anhydrorhodovibrin, alloxanthin and Tetradecanoyl-hexadecanoyl compounds. They further characterized the pigment by testing for bioactive properties. The results revealed that indeed, GL8 is special!

How special is this ‘GL8’? In their study published in Process Biochemistry, the team  report that not only is the pigment produced by GL8 a wonderful colorant, but it also has a multitude of useful biological properties. For instance, its broad-spectrum antimicrobial activity makes it perfectly suited for application in the manufacture of smart fabrics with an antimicrobial finish. Additionally, this pigment has anti-oxidant properties, and acts as a bio-enhancer, augmenting the effects of established antibiotics and anti-fungal agents, making it an ideal candidate for use as a food preservative. Interestingly, the pigment also showed growth stimulating properties of murine skin cells but no toxicity to human cells, which may open avenues for its application in expediting wound healing. In fact, the researchers have filed patents based on their impressive discoveries, which they believe will provide unique local solutions to global problems of nutrition, medicine, and environment.

Puzzling on the question of why a minuscule microbe would possess such a diversely powerful pigment, Prof. Dev speculates, “Melanin pigment in our skin protects us from hazardous UV radiation, which can cause skin cancers. Similarly, many living organisms produce some unique pigments as survival strategies in response to harmful radiations, pollutants, or freezing conditions.”

Whatever may be the reason for its evolution, there is no denying the usefulness of this pigment to humans. While the researchers explore this wonder microbe to unravel its superpowers further, the world holds onto the hope for applications of its currently identified anti-microbial properties to fight the increasing incidences of pathogenic infections, like the ongoing COVID-19 pandemic. We have our fingers crossed!