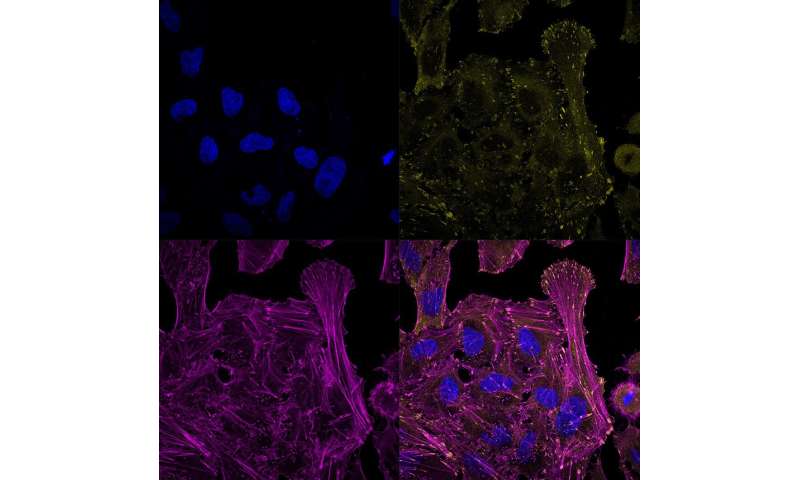 Researchers of the “Cell Biology and Physiology-LABRET” group of the University of Malaga (UMA), together with the Networking Biomedical Research Center in Bioengineering, Biomaterials and Nanomedicine (CIBER-BBN), have described a new genetic skeletal disorder based on a precision medicine strategy.

By using methods of massive sequencing -of all genes- they have identified the mutations that caused a rare bone disorder, particularly, the mutations in “LAMA5,” the gene encoding an extracellular matrix protein around blood vessels in skeletal tissue.

This disorder consists in an extreme bone fragility combined with a lack of mineralization and skeletal deformity associated with joint dislocation and heart diseases, as well as a pulmonary insufficiency that causes perinatal mortality -at the time of birth.

The study was carried out at the Andalusian Centre for Nanomedicine and Biotechnology (BIONAND), in collaboration with the International Skeletal Dysplasia Registry of the University of California (Los Angeles), where the sequencing of affected patients’ genes was conducted. The Masaryk University (Czech Republic) also participated in the study.

“Our scientific team has been researching rare genetic syndromes affecting the skeleton for years, with a view to find a medical solution for patients with complicated diagnosis and treatment,” explains the researcher of the Department of Cell Biology, Iván Durán, main author of the study, which findings have been published in the scientific journal EBIOMEDICiNE.

According to this expert, precision medicine is the key to uncovering the genetic and molecular factors that produce this type of pathologies, and hence understanding the mechanism that causes them, enabling the development of tailored therapies.

Therefore, the researchers of the UMA have also described the mechanism of disease by generating cell models based on gene editing, simulating the mutations in LAMA5 in order to confirm if these mutations are the cause and determine the molecular process that triggers the problem. These cell models were developed by gene editing with CRISPR, introducing mutations causing a null or hypomorphic gene.

“Thanks to these models we uncovered a new signaling pathway governing the skeleton formation—that makes the bone grow and stay healthy—which means that our work has not only revealed a new disease, but also an unknown mechanism that could be used for common bone conditions,” says Durán.

As he clarifies, the presence of LAMA5 among cells involved in the skeleton formation indicates, therefore, that the appearance of signals from special blood vessels could be a highly effective means of bone repair and regeneration.

“Not only do blood vessels provide irrigation to bones, but also convey signals and support niches for stem cells that can be mobilized to induce a regenerative process. It seems that LAMA5 is a key component to support pericyte-like stem cells,” he clarifies.

Osteoporosis and osteogenesis imperfecta are diseases that cause bone fragility and affect a significant percentage of the population. Besides, these pathologies often present bone defects that are very difficult to repair. These scientific breakthrough will facilitate the design of new treatments and strategies for all types of bone fragility conditions.