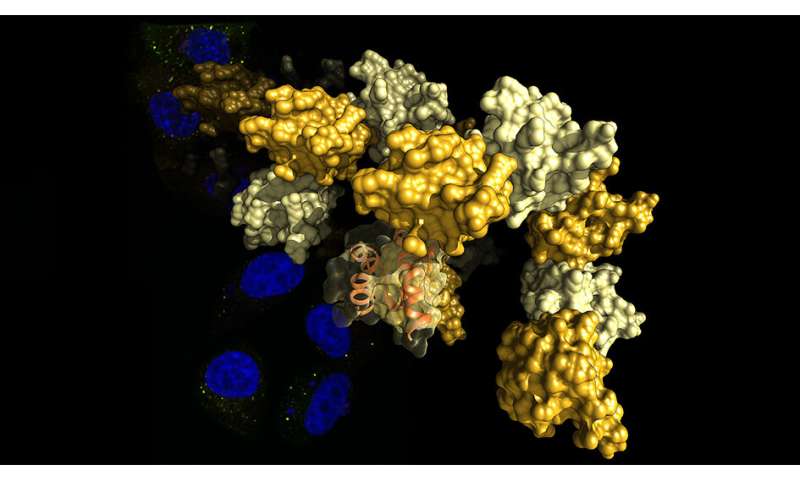 Researchers have found drug fragments, which could help improve our understanding of the function of a key cancer protein and ultimately lead to new drug treatments.

The drug fragments identified in the work could be potential building blocks of future drugs, and the team hope to use their understanding of the fragments to be able to develop more potent compounds in the future.

In a new study, published in the journal Scientific Reports, researchers at The Institute of Cancer Research, London, took a systematic approach to look at the enzyme tankyrase.

The work, which is an example for a collaboration between different research teams at The Institute of Cancer Research, was led by Professor Ian Collins and Dr. Sebastian Guettler, with team member Dr. Katie Pollock as lead author.

Turning the tide on tankyrase

Tankyrase is part of a family of proteins called poly(ADP-ribose)polymerases, or PARP. These proteins are involved in lots of different processes in the cell, such as repairing DNA and keeping the genome stable, turning on genes or responding to signals, by adding the molecule ADP-ribose to other molecules in the cell.

The addition of ADP-ribose triggers various reactions in the cell, and blocking this process is now being used in treating cancer.

Using a library of drug fragments built at the ICR, the team took two different approaches to examine which fragments in the library interact with tankyrase.

The scientists, who were supported by funding from the Wellcome Trust, Cancer Research UK, the Lister Institute and ICR, used a technique called differential scanning fluorimetry to look for fragments in the library which had a stabilising effect on tankyrase.

Differential scanning fluorimetry involves heating proteins up and observing the precise temperatures at which they lose their structure and unfold. This is defined as the melting temperature.

Repeating this experiment across a whole library of fragments threw up several fragments of interest.

When a fragment binds to the protein of interest, in this case tankyrase, the time the fragment nuclei spend in the energised state shortens once the magnetic field is removed.

Scientists can use this effect to assess whether the fragment binds to the protein. This series of experiments identified additional fragment molecules that bound to tankyrase.

Once the group had identified fragments from the library, the work was validated in a series of focused experiments in which binding was measured using different methods to assess whether it was observed correctly the first time around.

Measurements were extended to fragments with a structure similar to, but very slightly different from the identified fragments, to identify which chemical features of the fragments were important for their binding to tankyrase.

In addition to this, the team used a different type of NMR spectroscopy, collaborating with Dr. Mark Pfuhl, a Reader in Cardiovascular Structural Biology at King’s College London, and used computer modelling to aid in their understanding of how the molecules were able to dock onto tankyrase.

The ICR demonstrated that drugs, which inhibit PARP enzymes, such as olaparib, could be particularly effective in BRCA-mutant cancers. Following trials led by the ICR, olaparib has been approved for use in ovarian cancer and been shown to work in people with breast and prostate cancers linked to the BRCA mutations.

Researchers hope that drugs that act on and stop the function of tankyrase could be another effective cancer treatment in the future.

Professor Ian Collins, Head of Chemistry in the Division of Cancer Therapeutics at the ICR, said:

“We are really excited about this work. The fragments we have identified here will serve as a starting point for developing substances which have a strong ability to bind to tankyrase.”

Dr. Sebastian Guettler, Team Leader in the Division of Structural Biology at the ICR, added:

“We are excited to see how these fragments can be developed into molecules that will help build our understanding of how tankyrase works in cells.”