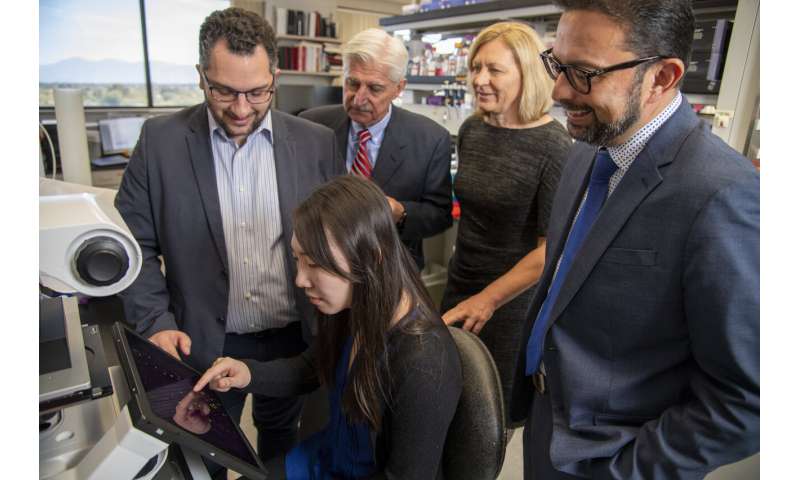 Imagine taking a pill to control your pain and, instead, the medication actually increases the pain you feel. That may be the situation for patients who take opioids, but even more so for women, according to groundbreaking research by investigators at the University of Arizona College of Medicine—Tucson in the Department of Pharmacology.

The researchers identified a mechanism that explains why women may be more vulnerable than men to develop pain in general, as well as to develop pain from opioids specifically.

The cause is a neurohormone, prolactin, known largely for promoting lactation in expectant mothers in their final months of pregnancy and after childbirth.

Frank Porreca, Ph.D., associate department head, a professor of Pharmacology, anesthesiology, cancer biology and neuroscience at the college, and senior author on the study, notes it always has been understood that women experience some types of pain that occur without injury (known as “functional pain syndromes”) more than men. The reasons for this never were clearly understood. A possible explanation the researchers explored was the differences in the cells and nerves that send pain signals to the brain in women and men.

“Of all these female-prevalent pain disorders, migraines are among the most common, with about 35 million migraine patients in the United States, and three out of four of those are women. In addition, in fibromyalgia patients, as many as nine out of 10 are women; for irritable bowel syndrome, three out of four are women. When you add up all those women with pain—if you can normalize that—this would provide a huge and important impact on medical care,” Dr. Porreca says.

He points out many of these pain spells are intermittent and associated with triggering events. For instance, he and his colleagues found stress releases prolactin and unexpectedly promotes pain selectively in females.

“These triggering events can be wide-ranging. They can include things like alcohol, fatigue and sleep disruption. But stress is the most common trigger self-identified by patients. That’s where we started our studies—how does stress contribute to female-specific pain or female-selective pain?”

Dr. Navratilova says dopamine D-2 receptor agonist drugs that limit prolactin release, such as cabergoline, commonly are used for other diseases, and are not addictive. These drugs, possibly in conjunction with other classes of medications, may help treat those pain conditions in women more effectively without the addictive properties of opioids.

“If we could just reduce the proportion of women who have migraines to the same amount as in men, that would be quite revolutionary,” Dr. Navratilova says.