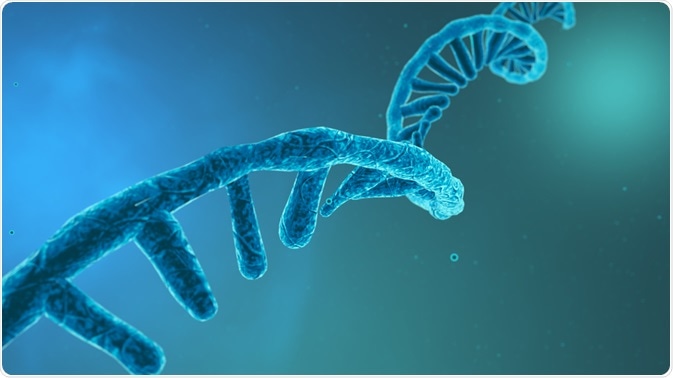 RNA is used for a number of regulatory and messenger functions within cells, with messenger RNA (mRNA) inducing the synthesis of proteins by cellular machinery, and other types such as small interfering RNA (siRNA) and micro RNA (miRNA) being involved in mRNA inactivation. Each of these types of RNA may be used in a clinical setting to achieve a variety of objectives, from immunization to cancer cell modulation. The highly specific nature of nucleic acid bonding lends RNA great utility in in vivo bioassays, being bound to a colorimetric indicator in either stationary points or individually to nanoparticles.

When used for this purpose these ligands are known as aptamers, though this term also refers to peptide ligands that allow targeting towards specific proteins. Besides being utilized for delivery and diagnostic purposes, RNA can also be used more directly as a therapeutic: to induce or suppress the production of a protein within a cell.

siRNAs are double-stranded, 21-23 base pairs long, and act to downregulate protein expression by binding with the relevant mRNA strand following incorporation into the RNA-induced silencing complex, a multiprotein complex involved in gene silencing. siRNAs have been in clinical trials aimed at treating a variety of illnesses for several years. For example, TKM-PLK1 is a siRNA drug that reduces the expression of polo-like kinase 1, which is involved in tumor cell proliferation.

Antisense oligonucleotides (ASO) are synthetic single-stranded nucleic acid sequences that can be deployed with similar function as siRNAs, though bear slightly differing properties. ASOs were developed earlier than siRNAs for use in the life sciences and clinic, and require more extensive chemical modification than siRNAs to remain active within the cell due to the single-stranded structure. However, besides the mRNA-inactivating function shared with siRNAs, ASOs can also be used to upregulate, restore, or modify the generation rate of a target protein by binding with upstream reading frames mRNA sequences and promoting exon skipping.

The introduction of exogenous proteins to cells has been exploited for therapeutic purposes in a variety of situations, though protein delivery into cells is difficult to achieve due to the size and conformational stability of proteins, particularly in vivo.

Introducing mRNA into cells, instead, allows the host cellular machinery to be commandeered to produce almost any protein desired. The 5’ cap and 3’ poly(A) tail of mRNA is modified to enhance stability and translation rate, and this technology has already been utilized clinically both for boosting expression of normally endogenous proteins in cases of deficient production, and to generate proteins that would not normally be present in human cells, such as the modified SARS-CoV-2 spike protein in some COVID-19 vaccines.

CRISPR-Cas systems utilize RNA to localize to the corresponding target DNA site, where the DNA is cleaved and the double-strand break is allowed to be repaired by other cellular machinery, or a new nucleic acid sequence is inserted at the site. These RNAs are known as short guide RNAs (sgRNA), and are usually shorter than 20 nucleotides, with intentional 5’ and 3’ mismatches that induce fewer off-target effects.

Unprotected RNA is vulnerable to nuclease degradation, has difficulty crossing the cell membrane due to the size and charge of the molecule, and has been demonstrated to induce an immune response in vivo.

Therefore, RNA therapeutics necessitate a carrier vehicle with good retention time in the body that is able to cross the cell membrane by some mechanism, preferably in a targeted and specific manner with a triggered release of the RNA payload. A wide range of materials from noble metals to synthetic polymers, lipids, and repurposed viral vectors have been utilized as RNA carriers for a number of applications both in vivo and in vitro.

In addition to a carrier, RNA therapeutics generally bear modifications to their molecular structure that suppress the immune response of the cell when applied both in vivo and in vitro. The latter may exempt the use of a carrier by direct injection of the RNA into the cytoplasm of the cell, though the aforementioned chemical modifications are still necessary.

mRNAs are more sensitive to changes in structure than smaller RNAs such as siRNA as they must be translated by the ribosome, though in turn, this allows shorter sequences to be modified to a greater extent, and thus be better protected from degradation.

Michael graduated from Manchester Metropolitan University with a B.Sc. in Chemistry in 2014, where he majored in organic, inorganic, physical and analytical chemistry. He is currently completing a Ph.D. on the design and production of gold nanoparticles able to act as multimodal anticancer agents, being both drug delivery platforms and radiation dose enhancers.