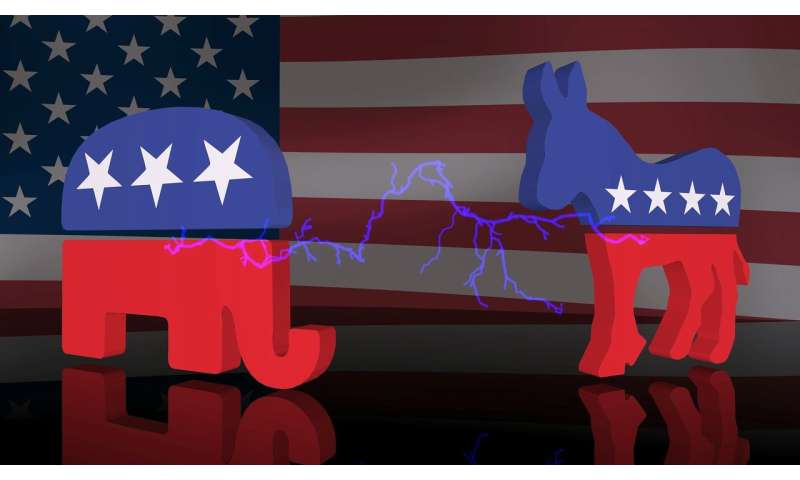 Young Californians who identify themselves as Republicans are less likely to follow social distancing guidelines that prevent coronavirus transmission than those who identify as Democrats or Independents, according to new USC study published today in JAMA Internal Medicine.

The findings among 18- to 25-year-olds mirror what many have observed about America’s politicized response to COVID-19, and are a source of alarm for public health experts. The United States is now averaging 207,000 new cases and 2,319 deaths per day, as of Friday.

“You might expect middle-aged or older adults to have established ideologies that affect their health behavior, but to see it in young adults who have historically been less politically inclined is unexpected,” said Adam Leventhal, director of the USC Institute for Addiction Science. “Regardless of age, we would never hope to find results like this. Public health practices should not correlate with politics.”

The study was conducted during the summer of 2020 via an online survey that was completed by 2,065 18- to 25-year-olds living predominately in Los Angeles County. The participants were initially recruited as ninth-grade high school students as part of the USC Happiness & Health Project, which has been surveying this group about their health behaviors every six months since 2013.

Of the young adults contacted, 891 identified as Democrat, 148 as Republican, 320 as “Independent or Other,” and 706 declined to answer or said they didn’t know what political party they identify with.

Researchers found that 24.3% of Republican young adults said they don’t frequently social distance from others, compared with just 5.2% of Democrats.

Differences in social distancing practices were also found when Republicans were compared to Independents and young adults who did not report a political party affiliation. Researchers discovered that Republicans versus other groups were more likely to visit public indoor venues such as malls, restaurants, bars or clubs, or attend or host parties with 10 people or more.

Throughout most of the COVID-19 pandemic, California has recommended that all residents practice social distancing and wear a mask when outside the home. Current restrictions prohibit private gatherings of any size.

Leventhal noted that when his team statistically adjusted for 21 factors that could explain the difference in social distancing across political party groups, including propensity for risk-taking behaviors, Republicans were 4 times more likely than the others to be infrequent social distancers.