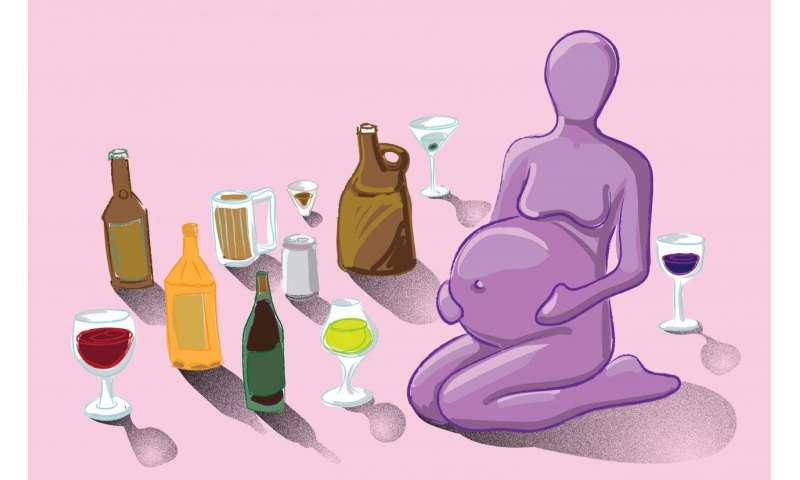 About 8 percent of West Virginia newborns are exposed to alcohol two to four weeks before birth, according to a new study.

“Alcohol exposure during the last trimester is associated with a range of developmental problems that may not be overtly expressed as cranio-facial deformities, but when these children go to school, you see that there are learning, cognitive, behavioral and so many other deficits—from memory to communicating, socializing and performing daily life skills,” said Amna Umer, a research assistant professor in the West Virginia University School of Medicine.

Umer, a researcher in the Department of Pediatrics, is part of a team that investigated the prevalence of prenatal alcohol exposure among babies born in West Virginia.

The team was led by Stefan Maxwell, a neonatologist with Charleston Area Medical Center.

A PETH forward for newborn screenings

The study comprised 1,729 newborns. The researchers analyzed dried blood spots for phosphatidylethanol—or PETH—a byproduct of metabolizing alcohol. PETH levels in the blood are biomarkers of alcohol exposure in the past two to four weeks.

The researchers matched the PETH levels with data from Project WATCH, which collects demographic information and health statistics for every infant born in West Virginia.

The team discovered that, on average, 8.10 percent of births involved PETH levels consistent with late-pregnancy alcohol use. The prevalence varied across the state, from 2.3 percent in the Eastern Panhandle to 17.1 percent in and around the Mid-Ohio Valley.

The study also found that prenatal alcohol exposure was associated with maternal smoking during pregnancy. And babies exposed to alcohol prenatally were more likely to be born premature (less than 37 weeks) and have a low birth weight (less than 2,000 grams).

As part of Project WATCH, all West Virginia birth hospitals use the Birth Score tool to gather data on newborns’ exposure to substances in utero. These substances include cannabinoids, tobacco, stimulants and opioids.

“Importantly, the new maternal substance use data won’t be used for any purpose other than public health surveillance,” said Hamilton, assistant director of Project WATCH.

She predicts that—with the collection of this new information—West Virginia’s official rates of prenatal substance exposure will increase overall.

Exposure in utero, problems in childhood

The actual incidence of drinking during late pregnancy is probably even greater than this study indicates.

“The PETH test won’t pick up just one glass or wine or one beer,” Maxwell said. “It’s sensitive only for what we call binge drinking, which would be three or four regular drinks in a day.”

And the blood samples that the researchers worked with weren’t tested for PETH immediately after collection. Six to eight months had elapsed.

“We think that the prevalence rate is even higher than 8 percent because of the degradation of our sample,” Umer said.

Still, the PETH test has an advantage over more conventional blood tests: it can detect biomarkers for alcohol use weeks after the drinking occurred. A regular blood test for the presence of alcohol may only produce valid results within a day of the alcohol exposure.

Because of the PETH test’s larger window of opportunity, it may prove useful for clinicians who want to screen newborns for alcohol exposure.

“The early detection of prenatal alcohol exposure and early diagnosis of fetal alcohol spectrum disorder means that interventions can be targeted at an earlier age to reduce the cognitive and behavioral deficits in later life,” Umer said.

“The problem is that when children at the age of 6 or 7 start to have these neuro-developmental disorders—leaning disabilities or whatever it may be—they get misdiagnosed,” Maxwell said. “They could be misdiagnosed with ADHD or autism or something else, or the diagnosis could be missed altogether. You could imagine these kids in kindergarten, getting bullied or put in the corner or made to sit outside.