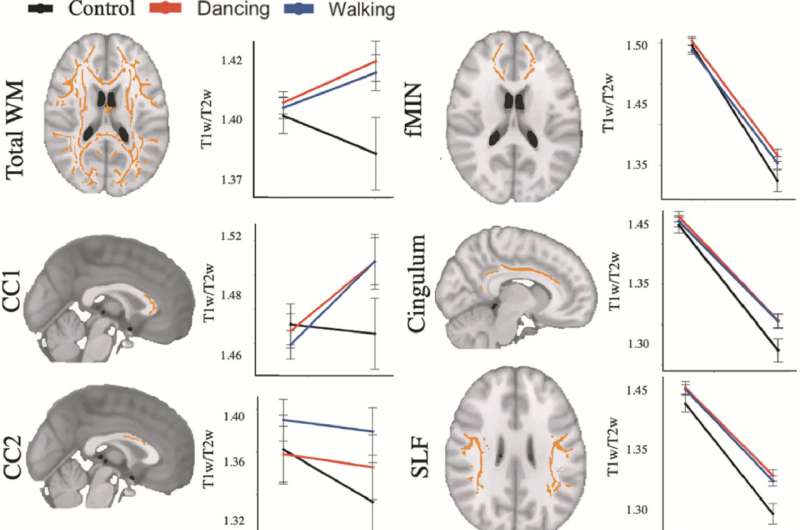 Neuroscientists have long known that aerobic exercises, like walking, swimming, running, or biking, are largely beneficial for brain health. Now, new research out of Assistant Professor Aga Burzynska’s BRAiN Lab at Colorado State University provides some of the first evidence that white matter, which connects and carries signals between neurons, can also change for the better in response to aerobic exercise, giving a boost to participants’ memory recall.

The study, published in NeuroImage on June 24, found that regions of the brain most vulnerable to aging were also the regions that benefitted most from aerobic exercise, suggesting that regular aerobic exercise is an effective strategy to reduce the risk of cognitive decline in a world where the incidence of dementia is expected to double every 20 years as the population ages.

White matter is commonly regarded as a passive brain tissue that takes a backseat to its active, gray matter counterpart, where powerful neurons live. If neurons are the brain cells that generate signals and electrical impulses, then axons in white matter are the wiring that transmit those signals between neurons.

White matter is mostly made up of the brain’s axon wiring; it received its “white” namesake due to the fatty proteins and lipids that coat the axon fibers. The insulation provided by those proteins and lipids helps to increase the speed at which signals can be passed from one brain region to another.

While neurodegeneration is often associated with a loss of neurons with age, and therefore a loss of gray matter, aging white matter can also impair cognitive health. A reduction in axon fibers, as well as lesions and microbleeds, are associated with age-related deficits in brain function; thus, interventions to prevent white matter aging are also important to the prevention of Alzheimer’s disease and other dementias.

A test of exercise

In Burzynska’s latest study, her team gathered a sample of 180 older adults who were healthy, but admittedly inactive—the ideal population to study when developing a baseline of how effective exercise can be.

“We decided to include healthy participants so that we can first understand what’s ‘more normal’ in healthy aging and further apply this knowledge later on in other populations, such as people with dementia,” said Andrea Mendez Colmenares, Burzynska’s graduate student and first author on the study.

Participants were then randomly separated into groups that met three times per week over the course of six months. One group walked for about 40 minutes at each session. Another group took a dance class that got progressively harder over the course of six months. And the final group, which acted as a control for the study, was limited to balance and stretch exercises that purposely aimed to keep their heart rates low.

Each participant underwent a series of magnetic resonance imaging and cognitive and cardiorespiratory testing before and after the intervention to assess the effects of physical activity on the brain.

To gauge the change in white matter over time, the team employed a technique called the T1w/T2w ratio, which involved MRI scans of the participants’ brains.

When MRI scans are taken, most often researchers and doctors are looking at T1-weighted and T2-weighted images. These are the black, white, and gray images of the brain often seen on TV medical dramas when the character’s brain is injured. In a T1-weighted image, white matter of the brain appears white, and gray matter appears gray, but on a T2-weighted image, the colors are inverted. It’s the coloring that helps researchers identify changes in brain anatomy, such as tumors, atrophy, or in this case, changes in white matter.

Since T1-w and T2-w images are widely available in most research studies, the team decided to combine the images to create a ratio to enhance the contrast that refers to the white matter of the brain. Using algorithms and advanced statistics, the team was able to extract values that show how specific regions of white matter changed over the course of the six-month intervention.

Mendez Colmenares also employed other white matter metrics using the more common technique of diffusion weighted imaging and by studying brain volume and lesions on the brain. Together, the metrics used led to one of the most comprehensive studies of white matter to date.

Using the T1w/T2w ratio technique, the team found that participants in the walking and dance groups had an increase in their white matter after six months of aerobic exercise.

In other words, physical activity positively affected the brain’s white matter, but especially in regions most vulnerable to aging, such as the corpus callosum and cingulum, which confer important cognitive abilities, such as memory and executive function.

Further, the walking group experienced the added benefit of improved episodic memory after the intervention and were more able to recall memories from their lifetimes.

Thus, activities that really raise the heart rate might be better equipped to combat certain side effects of brain aging.

However, the opposite is true of activities that aren’t as vigorous: Participants in the team’s study who were limited to low-intensity exercises, such as stretching or balancing postures, experienced a normal, slow decline in white matter signal over six months, and no changes in episodic memory.

A little goes a long way

Taken together, the results support public health recommendations for regular moderate-to-vigorous physical activity, specifically 150 minutes of physical activity per week, according to the American Heart Association and other health organizations.

Further, the findings strengthen the idea that white matter is “plastic” and able to change as a result of experience or intervention, even in the short-term—some positive news for those who might be looking to add more exercise to their lifestyles.

“The fact that we were able to show results in white matter in a clinical trial in only six months means that you don’t need to exercise your entire life to show some changes in your brain,” Mendez Colmenares said.

Mendez Colmenares added that she hopes this research paves the way for personalized recommendations in the future that tailor exercise to what works best for each individual, based on their own biology and physiology.

“We hope this can advance the field of white matter aging and dementia in the way that more recommendations for non-pharmacological treatments and lifestyle interventions can be better directed to people who are aging normally, and to people who have some impairment, so that people can live independently for longer and with better cognition,” she said.

Moving forward, Burzynska’s BRAiN Lab is drilling down into other, more advanced white matter techniques to help verify the findings and better understand the mechanisms controlling white matter alterations in the brain.