Kawasaki disease is thought to occur in 4.5 in 100,000 children under the age of 18 in the UK. Kawasaki is the main cause of acquired heart disease in this group and now, a group of at least 12 young coronavirus victims in intensive care units in Britain have come down with a form of the toxic shock syndrome. What is Kawasaki disease?

What is Kawasaki Disease?

According to the NHS Great Ormond Street Hospital (GOSH) site, Kawasaki Disease causes swelling of the blood vessels of the heart as well as a high fever and rash.

Just like COVID-19, very little is known about Kawasaki Disease.

The disease was identified in 1967 in Japan by Tomisaku Kawasaki, but the cause is still to be discovered.

Kawasaki normally presents itself with several symptoms not unlike scarlet fever and it mainly affects children under five years old. 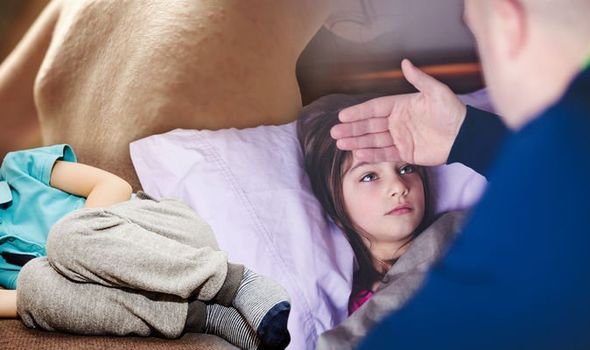 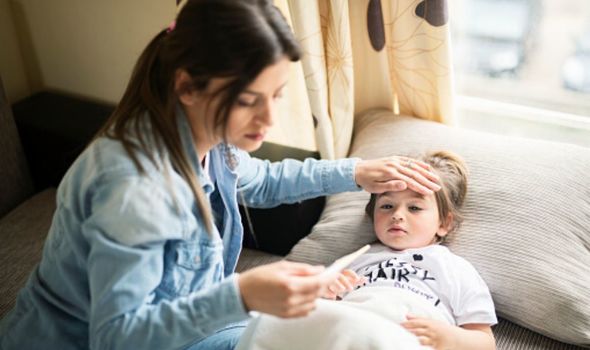 Professor Powis said: “We have become aware of reports in the last few days of severe illness in children, which might be a Kawasaki-like disease.

“Both Chris [Whitty] and I are aware of that. We have asked our experts – I’ve asked the National Clinical Director for children and young people to look into this as a matter of urgency, and I know the secretary of state is concerned, as he’s said.

“What I should say, as we’ve already said this afternoon, is that our advice to parents is ‘this disease is very, very rare’.

“If you are worried about a child that is becoming sick, not recovering, then do remember to contact 111, talk to your GP, or in an emergency, contact 999, because the emergency services and the NHS are there for sick children.”

Professor Powis emphasised how rare the disease is, but said: “You should still come forward and seek treatment and diagnosis as quickly as possible.” 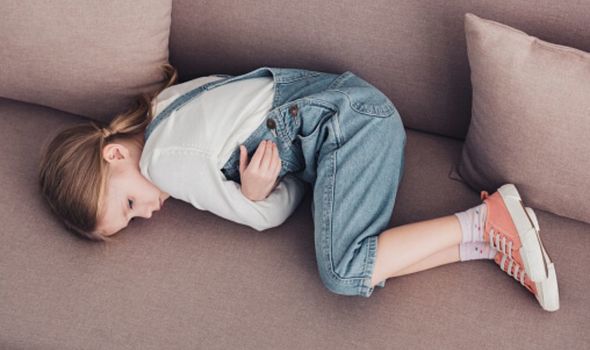 Chief Medical Officer Professor Chris Whitty revealed that the condition may be linked to the coronavirus outbreak.

He told parents to contact 999 if the symptoms in their children continue.

Prof Whitty said: “This is a very rare situation, but I think it is entirely plausible that this is caused by this virus, at least in some cases.

“Therefore, given we’ve been given a new presentation of this, at a time with a new disease, the possibility – it’s not definite, we need to look at other causes too – but the possibility that there’s a link is certainly plausible.

“But back to Steve’s overarching point; numbers are small, if parents are worried, then phone up and get advice. It’s very rare.”

DON’T MISS…
UK schools warning: Teacher breaks silence over biggest fears [INFORMER]
Coronavirus symptoms: How to tell you have COVID-19 – key indicator [EXPLAINER]
How to ask the Government a question at the next coronavirus press con [EXPLAINER]

More than a dozen children have been diagnosed with a life-threatening combination of coronavirus, Kawasaki disease, and a form of toxic shock.

The children had fevers, severe abdominal pain, and some had skin rashes.

The most concerning symptom, though, was the severe inflammation revealed by blood tests.

This symptom is common in adult patients with severe COVID-19 infections.

It is thought that the illness may be a post-infection inflammatory response, where the immune system goes into overdrive.

An NHS source has said: “These cases happen when someone with Kawasaki disease gets COVID-19 and that produces complications.”

The UK Paediatric Intensive Care Society took to Twitter last night to inform followers of an NHS England alert about the collection of symptoms.

The alert was sent to GPs in north London by their clinical commissioning group.

It has since been sent to a wider group of doctors, and was confirmed in a separate “urgent alert” issued by the Paediatric Intensive Care Society last night. 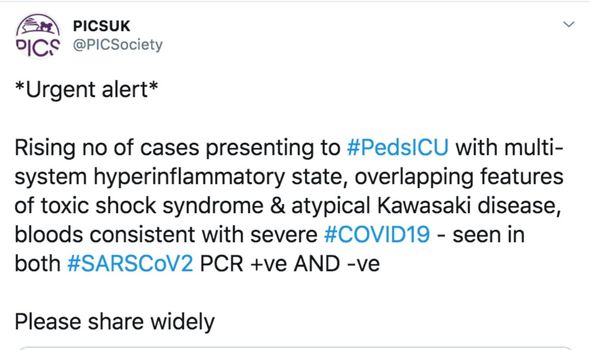 The alert warned of a “rise in the number of children… presenting with a multi-system inflammatory state”.

The warning said the condition would require “intensive care” treatment.

It read: “Over the last three weeks, there has been an apparent rise in the number of children of all ages presenting with a multi-system inflammatory state requiring intensive care across London and also in other regions of the UK.

“The cases have in common overlapping feature of toxic shock syndrome and atypical Kawasaki disease with blood parameters consistent with severe Covid-19 in children.

“Abdominal pain and gastrointestinal symptoms have been a common feature, as has cardiac inflammation.

“This has been observed in children with confirmed PCR positive Sars-CoV-2 infection as well as children who are PCR negative. 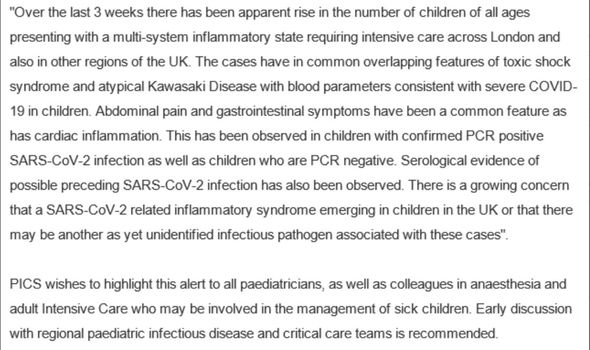 Sars-CoV-2, otherwise known as SARS, is the proper name for the virus that causes COVID-19.

“There is a growing concern that a Sars-CoV-2-related inflammatory syndrome is emerging in children in the UK, or that there may be another, as yet unidentified, infectious pathogen associated with these cases.”

The Health Service Journal responded to the alert, saying: “Little is known so far about the issue, nor how widespread it has been, but the absolute number of children affected is thought to be very small, according to paediatrics sources.

“The syndrome has the characteristics of serious COVID-19, but there have otherwise been relatively few cases of serious effects or deaths from coronavirus in children.

“Some of the children have tested positive for COVID-19, and some appear to have had the virus in the past, but some have not.

“The fact that very few children have become seriously ill with the virus or died, compared to adults, remains the case.

What are the symptoms of Kawasaki Disease?

The NHS GOSH website says the symptoms are suggestive of an infection, but the fever lasts for more than five days and the disease is not contagious

Abdominal pain, gastrointestinal symptoms, and cardiac inflammation have been seen in the recently affected children, but the site lists the following as symptoms of Kawasaki disease:

• feeling unwell
• fever (high temperature) over 38C
• swollen lymph nodes (glands in the neck)
• rash (especially on the chest)
• palms of the hands and soles of the feet turn bright red, become puffy and the skin can peel
• redness on the insides of the eyelids, lips tongue and inside the mouth
Doctors have been warned to refer children experiencing these symptoms to intensive care urgently.