Twenty-six residents – aged between 35 and 96 – were delighted by the experience, with one 88-year-old saying she finally felt ‘freedom’.

Two were having end of life care, a 35-year-old recovering from a serious brain injury, and a wheelchair-bound man who had his leg amputated.

CHD Living, which has 12 care homes in Surrey, sourced wheelchairs that were able to glide on the ice while being pushed.

Rosie Livinia Kirkin, 88, said the experience allowed her to reminisce about her 20s, when she would go to an ice rink in Richmond. 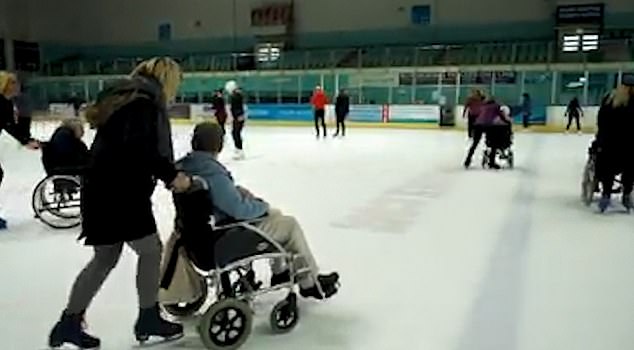 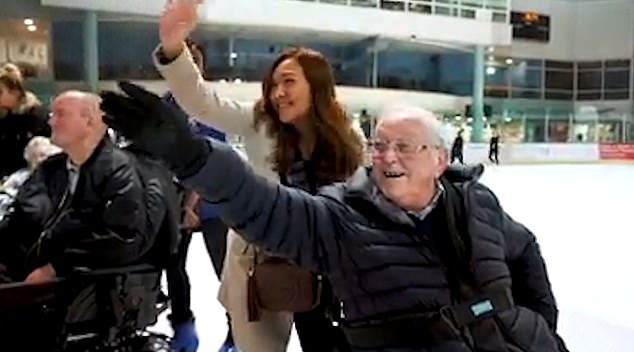 Lewis Spicer, 91, has been receiving care at Brownscombe House since having his leg amputated. His wife said he ‘looked absolutely free’ on the ice 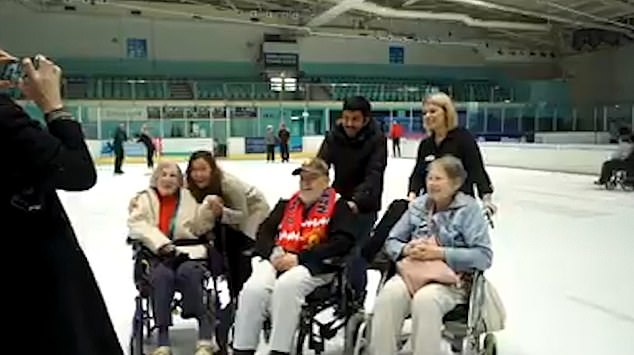 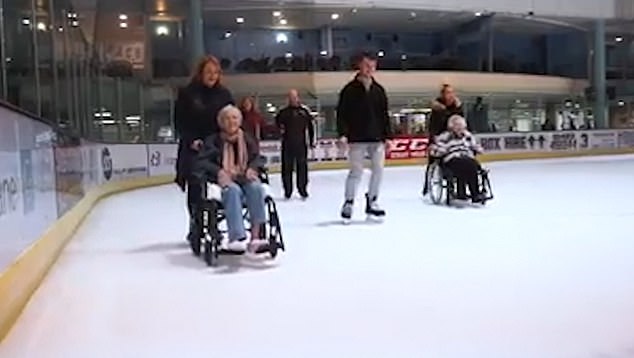 The group were taken out to Guildford Spectrum’s ice rink on a cold afternoon on January 13, Metro reports.

The idea was prompted after residents were discussing memories from their youth over the festive period. Ice skating was one hobby they had particularly enjoyed.

Justin Bailey, an ice rink supervisor, said it was important for those who are wheelchair-bound to be included in society.

Residents in care homes are encouraged to engage in social activities to maintain their health and mental wellbeing.

Care homes tend to offer a range of activities to get everyone involved, so that no one is lonely. Sometimes these are outside of the home, so residents still feel a part of society.

Lewis Spicer, 91, has been receiving care at Brownscombe House since having his leg amputated.

His wife, Sue, said: ‘It was fantastic to see Lewis on the ice today. He looked absolutely free, which he hasn’t in a while since becoming an amputee. 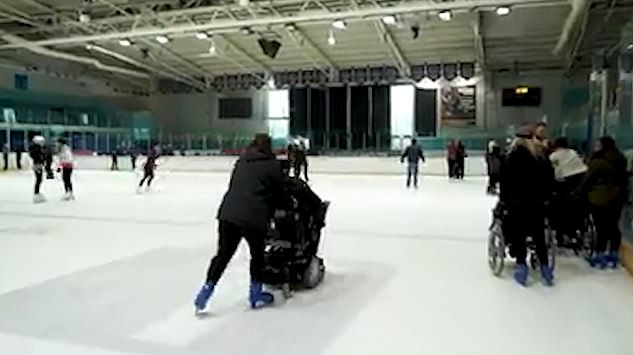 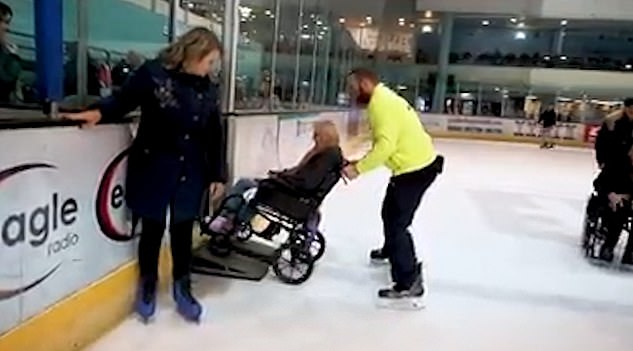 Shaleeza Hasham, Head of Hospitality & Communications for CHD Living, said the day out in the local community brought ‘so much joy’ to the residents. It was prompted by residents chatting about their youth over the festive period

‘Experiences like this mean so much to the residents because they stimulate them and, although they often can’t talk, the memories stay with them and draw them into life.’

Rosie, who used to whizz round the ice rink in her 20s, said: ‘To come here brings back lovely memories and takes me back to my young days.

‘I love the feeling of freedom that skating gives you and I’d like to thank CHD Living for organising such a special day out for us.’

Shaleeza Hasham, head of hospitality and communications for CHD Living, said the day out in the local community brought ‘so much joy’ to the residents.

She said: ‘Socialisation, keeping residents active and stimulated, as well as giving them the opportunity to meet new people whilst not being confined to the four walls of their homes is imperative in ensuring our residents continue to live their lives to the fullest.’

WANT TO LIVE LONGER? GO TO THE THEATRE ONCE A MONTH

Going to the theatre once every month may slash your risk of a premature death, a study by University College London suggests.

Volunteers who engaged with the arts every few months were 14 per cent less likely to die by the end of the study.

The research adds to evidence that engaging in art, whether playing the didgeridoo or admiring paintings, can benefit your health.

The research, which was published in December 2019, is the first to suggested engaging in the arts may halt an early death.

Previous studies have shown those who get involved have improved physical and mental health.

A review of research published in November 2019 by the World Health Organisation, showed that art is valuable for an array of health problems.