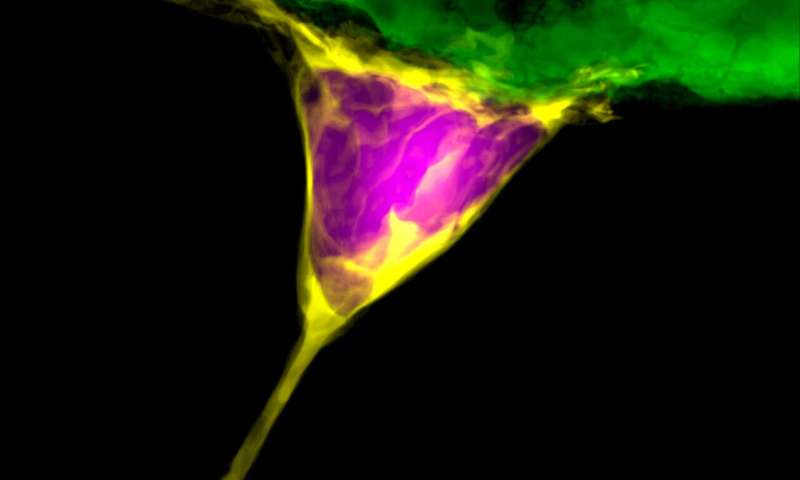 A new mechanism of blood redistribution that is essential for the proper functioning of the adult retina has just been discovered in vivo by researchers at the University of Montreal Hospital Research Centre (CRCHUM).

Their study was published today in Nature.

“For the first time, we have identified a communication structure between cells that is required to coordinate blood supply in the living retina,” said Dr. Adriana Di Polo, a neuroscience professor at Université de Montréal and holder of a Canada Research Chair in glaucoma and age-related neurodegeneration, who supervised the study.

“We already knew that activated retinal areas receive more blood than non-activated ones,” she said, “but until now no one understood how this essential blood delivery was finely regulated.”

The study was conducted on mice by two members of Di Polo’s lab: Dr. Luis Alarcon-Martinez, a postdoctoral fellow, and Deborah Villafranca-Baughman, a Ph.D. student. Both are the first co-authors of this study.

In living animals, as in humans, the retina uses the oxygen and nutrients contained in the blood to fully function. This vital exchange takes place through capillaries, the thinnest blood vessels in all organs of the body. When the blood supply is dramatically reduced or cut off—such as in ischemia or stroke—the retina does not receive the oxygen it needs. In this condition, the cells begin to die and the retina stops working as it should.

Wrapped around the capillaries are pericytes, cells that have the ability to control the amount of blood passing through a single capillary simply by squeezing and releasing it.

“Using a microscopy technique to visualize vascular changes in living mice, we showed that pericytes project very thin tubes, called inter-pericyte tunnelling nanotubes, to communicate with other pericytes located in distant capillaries,” said Alarcon-Martinez. “Through these nanotubes, the pericytes can talk to each other to deliver blood where it is most needed.”

Another important feature, added Villafranca-Baughman, is that “the capillaries lose their ability to shuttle blood where it is required when the tunnelling nanotubes are damaged—after an ischemic stroke, for example. The lack of blood supply that follows has a detrimental effect on neurons and the overall tissue function.”