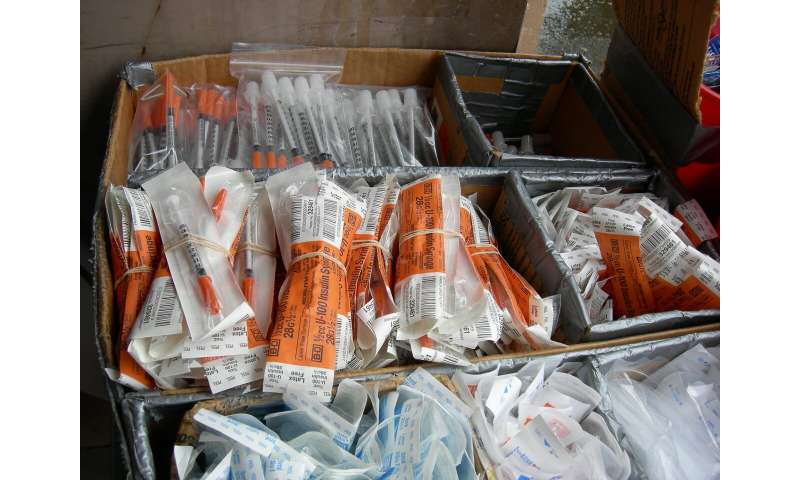 New Zealand has avoided the high HIV rates seen among high-risk groups in other countries, a new study shows.

Sustained, extremely low levels of HIV transmission among people who inject drugs, including gay and bisexual men, reflect the success of needle-exchange programs and other harm reduction measures, researchers say.

The new study shows in the years from 1996 to 2018, Aotearoa New Zealand averaged just one HIV diagnosis per year among both heterosexual people who inject drugs, and the most at-risk group in the study: gay and bisexual men who inject drugs.

In the 23-year period covered, 1653 people were diagnosed with HIV (excluding cases contracted overseas). The most common mode of transmission was sex between men (77.4 percent), followed by sex between men and women (14.2 percent). Only 2.9 percent of the cases were in people who injected drugs.

The lead author is Dr. Peter Saxton from the University of Auckland’s Centre for Addiction Research. “Our study shows that HIV has been effectively controlled among most people who inject drugs in New Zealand, and this record has been sustained over multiple decades,” he says.

“The fact that HIV diagnoses have remained so low for so long in New Zealand suggests that effective interventions have reached the majority of people who inject drugs. These include needle exchange programs, condoms, HIV testing and treatments. It’s critical that these services continue, and engage better with those who continue to find themselves at risk of contracting HIV.”

Established in the late 1980s, the New Zealand Needle Exchange Programme is a network of 20 regional outlets and 180 pharmacies and alternative outlets who supply free, sterile needles and empathetic advice and information to injecting drug-users. It’s an example of the harm reduction approach to drug use, which seeks to work alongside people to improve their health and wellbeing without coercion, judgment or discrimination.

Co-author Dr. Geoff Noller is a researcher with the program. “There is no question that the inception 30 years ago of a national needle exchange program, a world first, has allowed New Zealand to maintain one of the lowest rates globally of HIV infection among people who inject drugs: consistently below one percent,” he says.

“But we have to remain on our toes. HIV is transmitted very easily by sharing unsterilized injecting equipment, and the potential for clusters of infection to occur quickly is always there. Ongoing resourcing of harm reduction strategies such as needle exchange, safe sex options and HIV surveillance in at-risk populations is vital.”

Dr. Rhys Ponton is a professional teaching fellow at the School of Pharmacy, University of Auckland. “This study further demonstrates the benefit and effectiveness of needle exchange in reducing the spread of HIV. The dedicated needle exchange services, alongside the wide network of community pharmacy needle exchange providers, are a key part of New Zealand’s successful approach to this public health issue.”

Prof Mark Henrickson, professor of social work at Massey University, Auckland, says, “It is very pleasing to see New Zealand HIV research on men who have sex with men (MSM) who also inject drugs. This research methodology is sound and reinforces the value of New Zealand’s early policy on decriminalizing possession of injecting equipment and funding syringe access schemes in response to HIV. As a result, the HIV incidence in injecting drug users, and in MSM who inject drugs in particular, has been remarkably low over the history of the epidemic in New Zealand. This is something about which New Zealand can be very satisfied. The findings of the present study clearly demonstrate the value of putting what can only be called common-sense policy interventions—responding to what is— over ideologically pure interventions that set health policy only based on what some groups think should be ideal human behavior.

Remembering that all injecting drugs are very likely to be illegal, creating an intervention strategy—access to needles and syringes—based on public health rather than criminalizing the behavior has worked. The study, therefore, has implications for testing of drugs at festivals and other events, the full implementation of the 2013 Psychoactive Substances (the ‘legal highs’) Act, for the upcoming cannabis referendum, and indeed for a health-driven (rather than criminalizing) approach to recreational drug use in general. The history of drug policies over the centuries has largely been driven by responses to socially stigmatized people who use drugs, rather than rational responses to the drugs themselves. This study suggests that when policymakers make rational choices led by concerns for public health then those policies work.

Nevertheless, there are some concerning findings in this study, notably the over-representation of Māori who have sex with men and also inject drugs and are infected with HIV. The present study highlights the lack of research in this area, and the apparent inability of the public health, iwi health, and HIV-prevention infrastructures to reach Māori. Previous research has found that Māori MSM are also more likely than tauiwi MSM to have sex with women; the disproportionately large number of Māori living with HIV is therefore very concerning for several reasons. It is not adequate to say that we do not know why Māori MSM who also inject drugs are overrepresented: even though the actual numbers are small, this finding signals the apparent systemic failure of existing prevention responses to attend to Māori. Funding for research in this population and appropriate interventions are urgently required.