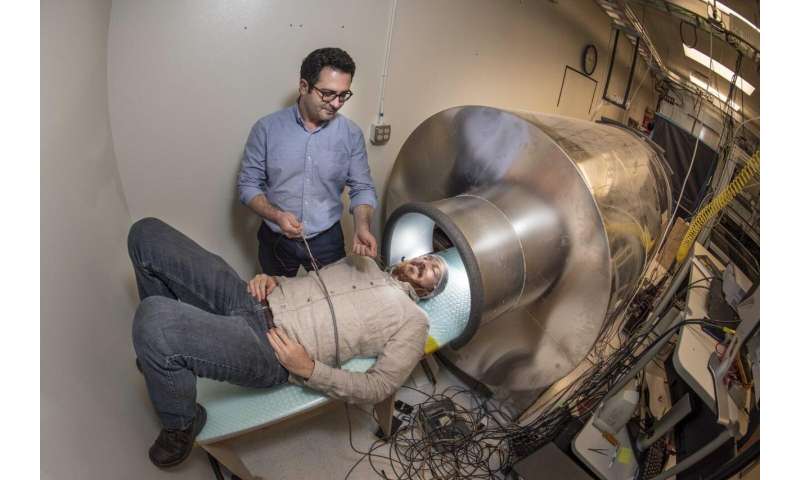 It might not start a fashion trend, but Sandia National Laboratories is designing a wearable brain imager.

“This is the future of MEG,” said Sandia MEG scientist Amir Borna, lead author on a paper describing the proposed system recently in the journal PLOS ONE.

Physicians use MEG to locate the sources of epilepsy, and researchers use it to study brain development, Alzheimer’s disease and stroke. But the procedure requires a person to hold still for long periods under a rigid, helmet-like dome, which can be difficult for children, people with chronic pain and people with motor disorders, such as Parkinson’s disease.

“The goal is to expand the number of clinical indications for which MEG may inform clinical care,” said Julia Stephen, director of the MEG core lab at the Albuquerque-based Mind Research Network, a division of Lovelace Biomedical Research Institute, and an advisor on the project.

According to Stephen, who is also a professor of translational neuroscience, a wearable device would give patients freedom to relax and move into comfortable positions during the procedure, enabling more people to be tested and eliminating differences in data between patient groups. Because the signal measured from the brain decreases with distance and the new system would fit closer than a one-size-fits-all helmet, measurements are expected to be more accurate for children.

Sandia’s Peter Schwindt, the project’s principal investigator, said what prevented this in the past was that superconducting sensors were used, requiring containers of liquid helium. The cryogenic hardware forces designers of these systems to fix the sensors into place.

But Sandia is using alternative sensor technology that works at room temperature, eliminating liquid helium and the rigid design requirements it imposes.

In the recent paper, the Sandia team showed its system, based on a kind of quantum sensor called an optically pumped magnetometer, or OPM, pinpoints brain signals with the same accuracy as a commercial, superconductor-based machine. Measurements made by each system were less than a centimeter apart. This research was also funded by NIH.

“We have demonstrated a functional brain-imaging system using our quantum sensors that is as reliable as a commercial superconductor-based system,” Borna said.

Borna credits the cross-disciplinary resources of a national laboratory to achieve the sensor’s high accuracy. The Sandia team designed, built and calibrated their sensors in-house, rather than buying commercial ones.

Information travels through the brain by electrical currents. Sandia’s sensor uses a laser to turn rubidium gas into a tiny cloud of atomic magnets that, when in a magnetic field, spin like tops. With Sandia’s current apparatus, a patch of these sensors is placed directly against a person’s head inside a magnetically shielded tube resembling an MRI. Then, a second laser measures changes in each cloud to infer a naturally occurring but barely perceptible magnetic field immediately outside a person’s head, created by the electrical currents in the brain. Finally, the magnetic field map is inverted to give the location of brain activity.

In the future, wearable version, more than 20 sensors will map the magnetic field over a portion of the brain, and the array will be housed inside a magnetically shielded room instead of a tube to allow the subject to move.