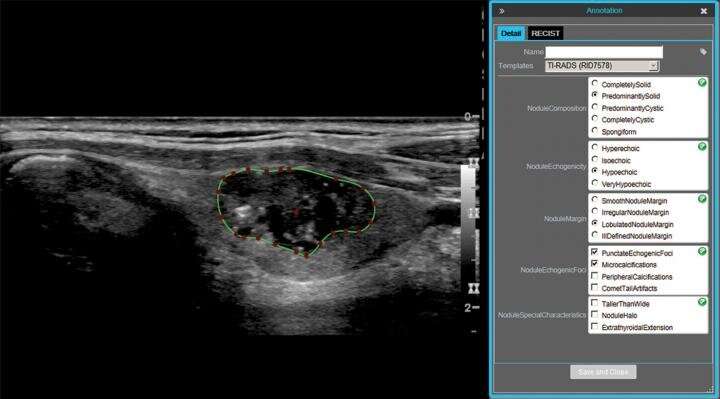 According to an article published ahead-of-print in the April issue of the American Journal of Roentgenology (AJR), a Stanford University team has developed a quantitative framework able to sonographically differentiate between benign and malignant thyroid nodules at a level comparable to that of expert radiologists, which may prove useful for establishing a fully automated system of thyroid nodule triage.

In the researchers’ framework, nodule features of echogenicity, texture, edge sharpness, and margin curvature properties were analyzed in a regularized logistic regression model to predict nodule malignancy. Authenticating their method with leave-one-out cross-validation, the Stanford team used ROC AUC, sensitivity, and specificity to compare the framework’s results with those obtained by six expert annotation-based classifiers.

Additionally, in a curative strategy at sensitivity of 1, use of the framework could have avoided biopsy in 20 of 46 benign nodules—statistically significantly higher than three expert classifiers. In a conservative strategy at specificity of 1, the framework could have helped to identify 10 of 46 malignancies—statistically significantly higher than five expert classifiers.