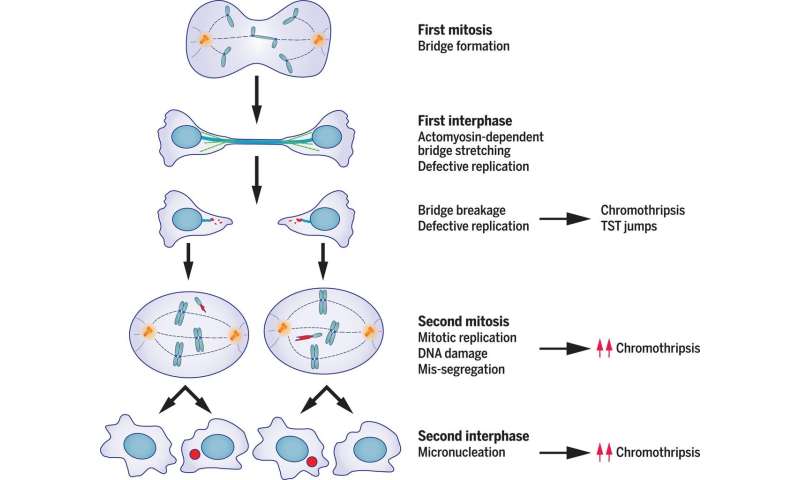 A team of researchers affiliated with multiple institutions in the U.S. and the U.K. has found that a single error during cell division can trigger a cascade of mutational events, generating many of the features found in cancer genomes. In their paper published in the journal Science, the group describes using live cell imaging and single-cell whole-genome sequencing to study the repercussions of single-cell mutational events on downstream cellular development. Jacob Paiano and André Nussenzweig with the National Cancer Institute at the National Institutes of Health have published a Perspective piece in the same journal issue outlining some of the recent history behind chromothripsis research and the work done by the researchers with this new effort.

Over the past several generations, medical researchers have assumed that the complexity of the genomes of many cancer tumors arises gradually—small mutations during replication added together over multiple generations can result in a large mix of errors. More recently, researchers have found that cancer genomes can evolve more quickly than previously believed due to a single catastrophic mutation. They have also found that the type of mutations seen in tumors can come about quickly due to a wide variety of processes, most particularly those occurring during the chromosome breakage-fusion-bridge cycle and chromothripsis (a process in which thousands of chromosomal rearrangements occur due to a single event). In this new effort, the researchers sought to find out whether the different processes that lead to such tumors might be related.