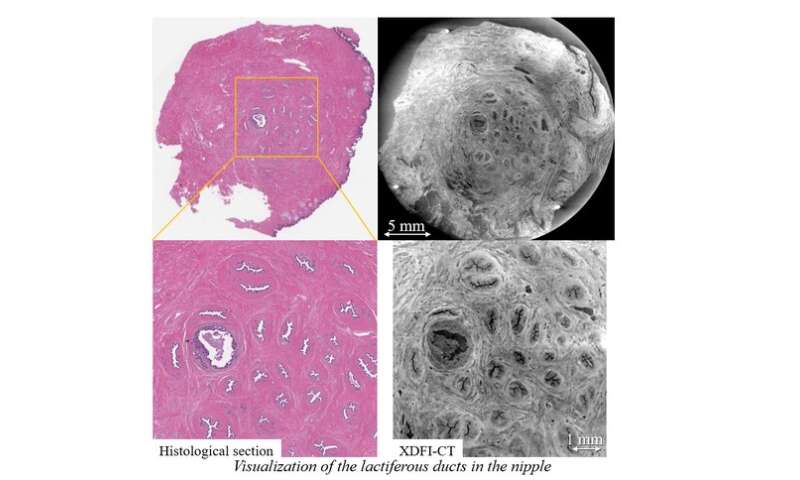 Nipple-sparing mastectomy is gaining ground as a treatment or preventive measure for breast cancer, given the understandable desire among patients to preserve natural appearance as much as possible. But the precise risk of preserving the nipple is not known as the cancer can spread along mammary ducts and to the nipple. A three-dimensional picture of the nipple structure can elucidate much more clearly than conventional reconstructions whether, where, and how much the cancer has spread to the nipple.

Conventional reconstruction from multiple two-dimensional tissue slices is a laborious process, is invasive, and does not give a clear understanding of the 3-D structure of the nipple. Thus, the search for better imaging techniques continues.

Recently, Associate Professor Sunaguchi from Nagoya University and his colleagues saw the potential of X-ray dark-field computed tomography (or XDFI-CT) as a promising alternative to existing nipple-exploration methods, such as needle biopsy or ductoscopy. XDFI-CT is a technique that can create a 3-D rendering of a structure based on the distribution of its electron density and refractive index. Sunaguchi and team hypothesized that XDFI-CT could provide a 3-D reconstruction of the human nipple that is at least as precise as images built from 2-D slices, with the added benefit that the proposed approach leaves the nipple intact and therefore has wider applications.

“In this study, which has been published in Breast Cancer Research and Treatment, we examined 51 human nipples by XDFI-CT and visualized the 3-D arrangements of the nipple ducts,” explains Assoc. Prof. Sunaguchi. First, XDFI-CT was used to obtain 2-D sections of the nipple so as to compare them with conventional tissue sections observed through light microscopy. The results showed that the 2-D CT slices were structurally compatible with the ones obtained through the conventional approach, giving a first demonstration of the capabilities of the method.

The CT-derived 2-D slices were afterwards easily turned into full 3-D renderings of the nipples, allowing the researchers to count the number of milk ducts and analyze the overall ductal structure, which varied from patient to patient. “Using 3-D volume renderings of the 51 samples, we discovered three different types of duct arrangements,” comments Assoc. Prof. Sunaguchi. These three types of arrangements were “convergent,” in which the ducts converged in a bowl shape centered at the tip of the nipple; “straight.” where the ducts grew parallelly from the base to the tip; and “divergent,” where the ducts diverged as they came closer to the tip. 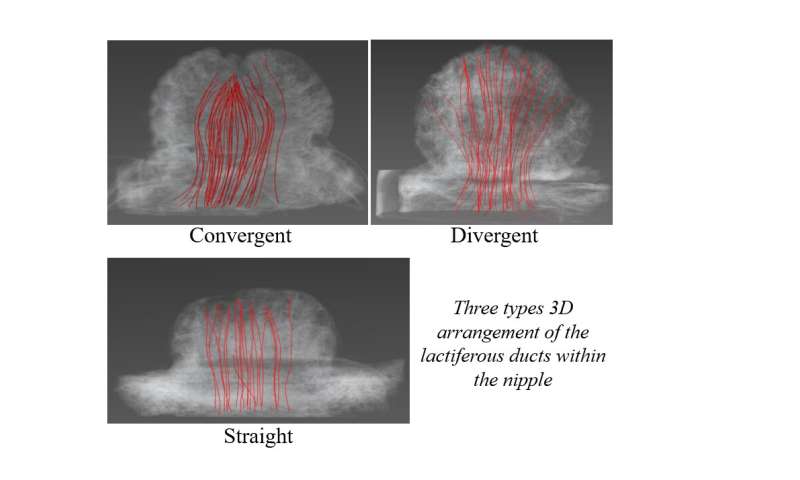 The findings of this study also provided evidence for “sick lobe theory,” which postulates that non-invasive ductal carcinoma (DCIS) begins in a single mammary lobe. In one particular sample, the researchers noted that three seemingly separate ducts with DCIS converged into a single opening near the tip of the nipple, implying that the three DCIS-ridden ducts were derived from the same cancerous mammary lobe.