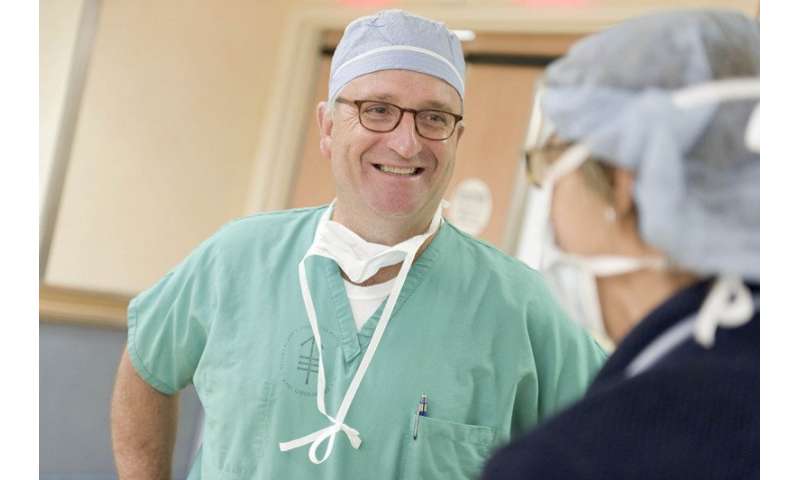 Because cancer is easier to successfully treat when it’s caught early, a major goal in cancer research is to develop new ways to find tumors at early stages, before they start to spread. One approach that’s being studied are liquid biopsies. These tests aim to find and diagnose cancer anywhere in the body by detecting biomarkers—materials that tumors shed into the bloodstream—in a blood sample.

In a study published August 13, 2020, in Cell by a team of collaborators from Memorial Sloan Kettering and Weill Cornell Medicine, researchers report that tiny packages of materials released by tumors, called EVPs (extracellular vesicles and particles), may serve as biomarkers for detecting a number of different types of cancer in the early stages.

“One of the holy grails in cancer medicine is to diagnose an early cancer in a patient based on a blood test,” says MSK surgeon William Jarnagin, Chief of the Hepatopancreatobiliary Service and co-senior author of the study. “This research is a proof-of-principle study; much more work is needed before it can be used as a screening tool. But ultimately, it would be fantastic if we could use this approach to find cancer in someone before they had symptoms.”

A different type of biomarker

Much of the previous work on liquid biopsies has focused on the detection and analysis of cancer genes that are released by cancer cells into the blood. Some of these liquid biopsies, including MSK-ACCESS, are already approved as a tool for monitoring treatment and matching patients who have cancer with the appropriate targeted therapy. Using liquid biopsies as a screening tool to detect previously undiagnosed cancer is still experimental.

The new study focuses not on analyzing genes but instead examining proteins contained in EVPs. David Lyden, a physician-scientist at Weill Cornell and the paper’s other senior author, studies EVPs in his lab and is a pioneer in the field. He has found that tumors may release EVPs as a way to prepare other parts of the body to receive cancer cells when they spread.

The researchers say that one potential advantage of focusing on proteins in EVPs rather than cancer genes is that it allows them to also characterize different types of cells found in the area around a tumor—called the tumor microenvironment. In addition, it could help them detect changes in other tissues, such as immune organs, which also contribute to EVP proteins that are seen in the blood.

The current study looked at whether EVPs might be useful in screening. It employed blood and tissue from people who were known to have cancer as well as some samples from cell lines and mouse models. The research included samples from 18 different cancers, including breast, colon, and lung, which came primarily from MSK. There was a comparison group of samples from people who didn’t have cancer.

A computational biology approach was used to match particular EVP protein signatures with certain types of cancer. “The amount of information that comes from this kind of study is monumental—it’s a huge amount of data,” Dr. Jarnagin says. “You really need high-throughput computer programs and machine learning to be able to sort through it all.”

Once the computing method was established, the team found that the computer could identify different types of cancer from the samples with a sensitivity of 95% (meaning that it found the cancer in 95% of cases) and a specificity of 90% (meaning that 10% of the cancers it identified turned out to be false positives).

“Even if this test became standard, we still would have to do CT and MRI scans to confirm where the tumor was located,” Dr. Jarnagin says. “But if you use a blood test to find who might be at risk of having a certain type of cancer, it would be a huge advance because we could target investigations to these high-risk patients.”

He adds that if this type of liquid biopsy is shown to be effective for clinical use, it’s likely to also be useful in monitoring the treatment response in people already diagnosed with cancer. It may also be a good tool to monitor people after treatment to determine whether their cancer has come back when it’s still too small to show up on a scan.

Next steps for validating findings

Using liquid biopsies to detect cancer is a much bigger challenge than using them to monitor cancers that are already known. For now, the team is focused on the next step: validating that their lab findings with EVPs will work with additional patients. Part of the validation process will involve testing this method in those who don’t have cancer but have an increased risk due to a strong family history or a known mutation in one of the BRCA genes, for example. Standard diagnostic methods will be used as a comparison in the validation process.

Dr. Jarnagin explains that in the future, liquid biopsies are likely to be especially important for diagnosing cancers that don’t currently have established screening methods, including liver and pancreatic cancers.