Researchers at Imperial College London in the UK have reported on round five of the REal-time Assessment of Community Transmission-2 (REACT-2) program – a cross-sectional community survey measuring the prevalence of antibodies against the novel severe acute respiratory syndrome coronavirus 2 (SARS-CoV-2) among adults in England.

The SARS-CoV-2 virus is the agent responsible for the coronavirus disease 2019 (COVID-19) pandemic that continues to pose a threat to global public health and has now claimed more than 2.53 million lives worldwide.

Round five of REACT-2 was carried out in the UK between 26th January and 8th February 2021. The survey, therefore, covered some people who had received one or two doses of a COVID-19 vaccine since the roll-out began in December 2020.

Helen Ward and colleagues say the survey data have revealed that antibody positivity is unevenly distributed across the population, with prevalence higher among key workers and some minority ethnic groups – similar to the pattern observed during the first pandemic wave.

Confidence in vaccination is high overall, but lower among some of the higher prevalence groups, pointing to a need for improved communication about perceived risks, says the team.

The researchers also say the data suggest that the optimum interval between the first and second dose may need tailoring to specific population groups.

A pre-print version of the paper is available on the medRxiv* server while the article undergoes peer review. 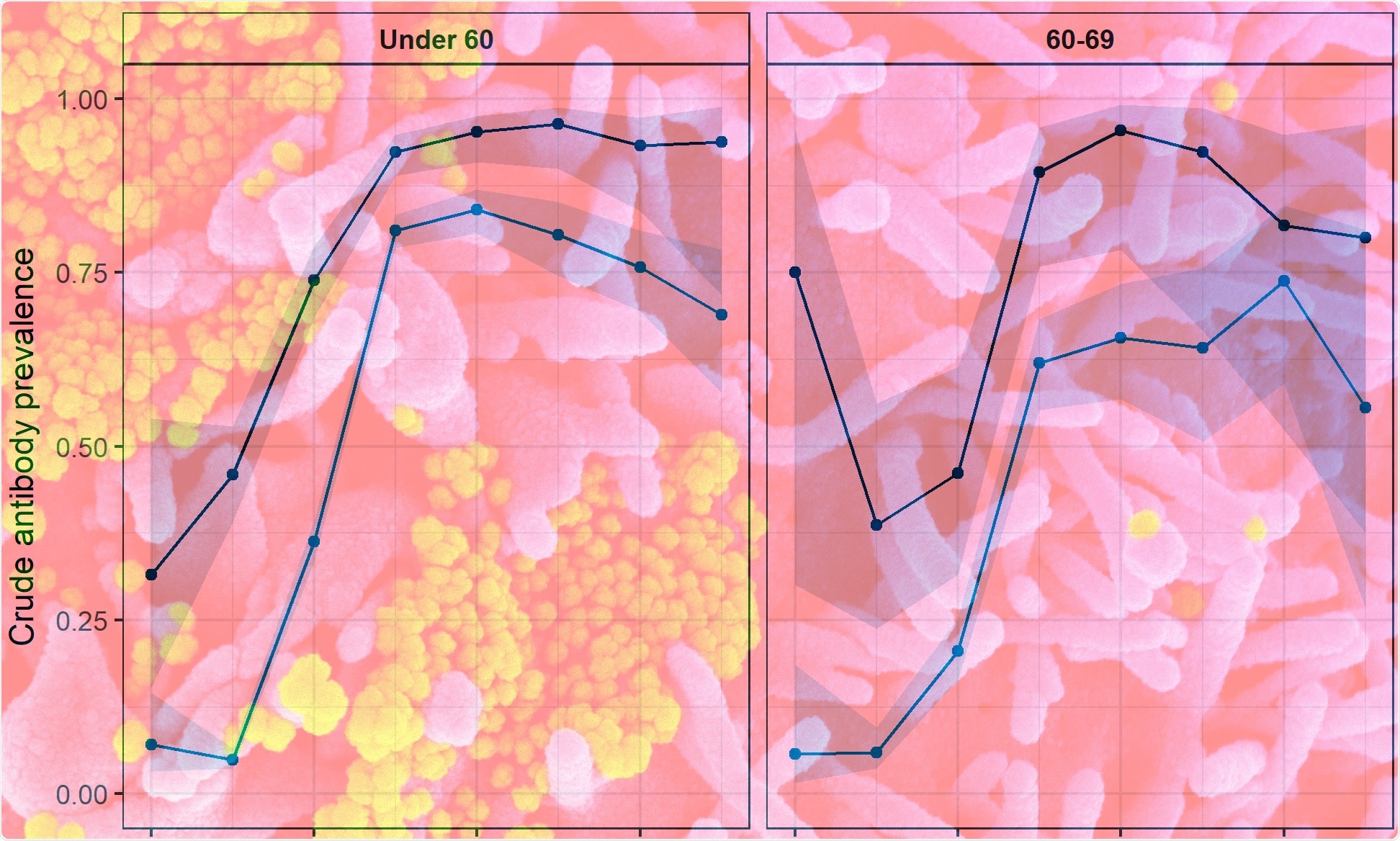 Study: REACT-2 Round 5: increasing prevalence of SARS-CoV-2 antibodies demonstrate impact of the second wave and of vaccine roll-out in England

The UK has experienced high rates of SARS-CoV-2 infection

During the COVID-19 pandemic, the UK has experienced particularly high rates of SARS-CoV-2 infection, especially among minority groups and more deprived communities.

A vaccination program was started in early December 2020, with older individuals, healthcare and care home workers prioritized for the first dose.

Roll-out has been rapid, with 15 million people in the country having received at least one dose of a vaccine by the third week of February 2021.

“There are some early signs that the program, initially targeting people over-70 years of age, health and care workers, older adults, care home residents and clinically extremely vulnerable people, is having an impact on hospitalizations, mortality and, possibly, transmission,” says Ward and colleagues.

What did REACT-2 and the current study involve?

Reconstructed epidemic curve from number of symptomatic infections per week, by date of onset in antibody-positive participants reporting symptoms

What were the results?

The overall prevalence of IgG antibodies was 13.9%. The prevalence was 37.9% among vaccine recipients, compared with 9.8% among unvaccinated individuals.

“The prevalence in vaccinated people reflects the recent roll-out of the program, with many people having received their first dose in the preceding three weeks and who would not have had time to produce detectable antibodies,” say the researchers. 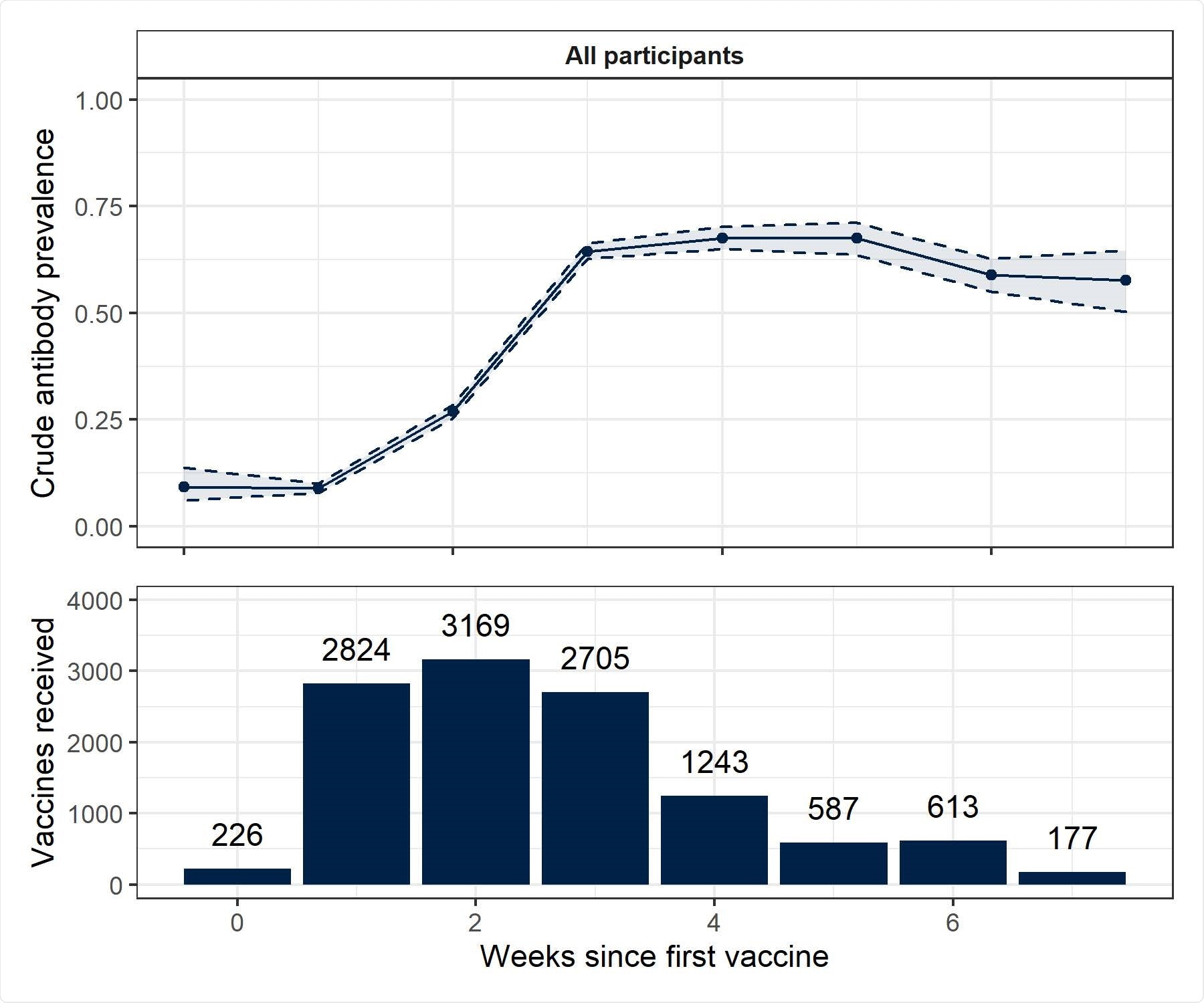 Increased prevalence was also observed among key workers such as those in education (11.4%), public transport (12.2%) and other public-facing roles than among non-key workers (7.8%).

“There is an uneven distribution of SARS-CoV-2 antibodies in the population with a higher burden in key workers and some minority ethnic groups, similar to the pattern in the first wave,” writes Ward and colleagues.

How confident were people in vaccination?

Confidence in vaccination was high overall (92.0%), but lower in some of the higher prevalence groups such as younger people and those of Black ethnicity.

“To ensure that the vaccination program is rolled out equitably to all sections of society, messaging of the benefits of the program – to the individual, their family, contacts and wider society – needs to be made readily accessible to different communities,” says Ward and the team.

More about the vaccinated individuals

Among 971 individuals who received two doses of vaccine, the antibody positivity was high (91.1%) across all age groups, although it was lower among those aged 80 plus than among those younger than 50.

“This may reflect higher rates of prior infection at younger ages or possibly reduced antibody response to vaccination in the oldest people consistent with some other vaccines,” suggest the researchers.

Among those who received one vaccine dose, 84.1% of those aged under 60 tested positive for antibodies, with a decreasing trend observed for increasing age. However, among those with confirmed or suspected prior COVID-19, the prevalence of antibody positivity following one dose was 90.1% across all age groups.

Optimum timing of first and second vaccinations may need tailoring

The team says the survey data suggest that the optimum interval between the first and second dose may need tailoring to specific population groups, with a longer interval perhaps being more appropriate among younger people and those with previous infection.

“Randomized trials to inform the optimum timing of first and second vaccinations are underway and, along with growing bodies of real-world evidence, will help inform challenging prioritization decisions for national and international bodies,” concludes the team.

medRxiv publishes preliminary scientific reports that are not peer-reviewed and, therefore, should not be regarded as conclusive, guide clinical practice/health-related behavior, or treated as established information.

Sally first developed an interest in medical communications when she took on the role of Journal Development Editor for BioMed Central (BMC), after having graduated with a degree in biomedical science from Greenwich University.