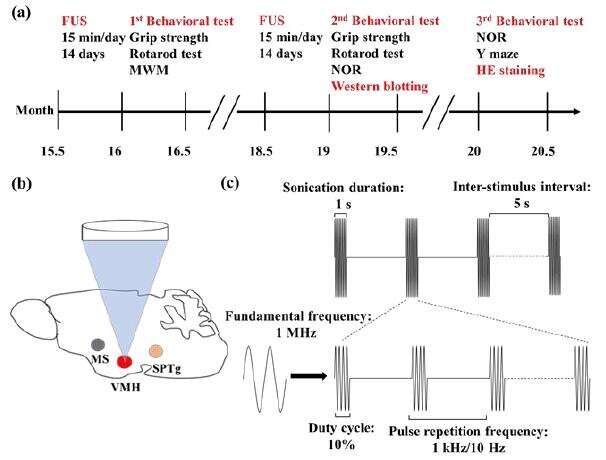 Transcranial ultrasound stimulation (TUS) is emerging as a non-invasive brain stimulation method that can achieve a highly focused stimulation of deeper brain areas.

The hypothalamus is the link between the endocrine and nervous systems. Previous studies showed that ultrasound could induce brain activity and the sensory discrimination ability of the primary somatosensory cortex of humans. However, the effect of ultrasound neuromodulation on hypothalamus is unknown.

According to a study published in IEEE Transactions on Ultrasonics, Ferroelectrics, and Frequency Control, scientists from the Shenzhen Institutes of Advanced Technology (SIAT) of the Chinese Academy of Sciences have demonstrated that TUS could effectively modulate the hypothalamus.

They used a low-intensity ultrasound to stimulate the hypothalamus for controlling the aging of mice. The TUS included an arbitrary waveform generator and a power amplifier. A focused transducer with a fundamental frequency (FF) of 1 MHz and a diameter of 25 mm was used.

Besides, scientists used the western blotting analysis to indicate the expression levels of Bcl-2, Bax, NMDAR2B, Iba1, TNF-α, and IL-1β in ventromedial hypothalamic nucleus (VMH) of the mice. They found that the responses of the apoptosis factors and inflammatory cytokines both decreased after ultrasound stimulation, which delayed the symptoms of aging.