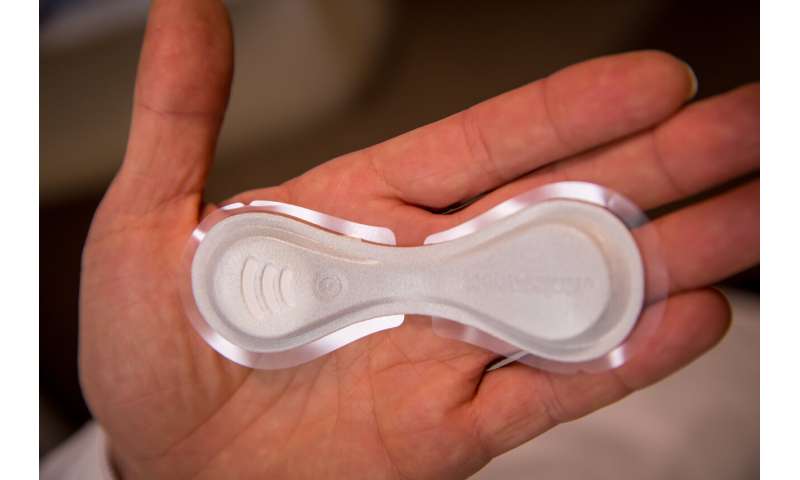 A new wearable sensor that works in conjunction with artificial intelligence technology could help doctors remotely detect critical changes in heart failure patients days before a health crisis occurs and could prevent hospitalization, according to a study led by University of Utah Health and VA Salt Lake City Health Care System scientists. The researchers say the system could eventually help avert up to one in three heart failure readmissions in the weeks following initial discharge from the hospital and help patients sustain a better quality of life.

“This study shows that we can accurately predict the likelihood of hospitalization for heart failure deterioration well before doctors and patients know that something is wrong,” says the study’s lead author, Josef Stehlik, M.D., M.P.H, co-chief of the advanced heart failure program at U of U Health.

“Being able to readily detect changes in the heart sufficiently early will allow physicians to initiate prompt interventions that could prevent rehospitalization and stave off worsening heart failure,” adds Stehlik, who also serves as medical director of the heart failure and heart transplant program at George E. Wahlen VA Medical Center in Salt Lake.

About 6.2 million Americans live with heart failure and it is the top hospital discharge diagnosis in the U.S. Up to 30% of these patients will likely be readmitted to the hospital within 90 days of discharge with recurrent symptoms including shortness of breath, fatigue and fluid buildup. In many cases, hospitalization diminishes a patient’s ability to care for themselves independently.

“Those individuals who have repeated hospitalizations for heart failure have significantly higher mortality” says Biykem Bozkurt, M.D., Ph.D., a study co-author, director of the Winters Center for Heart Failure Research at the Baylor College of Medicine in Houston. “Even if patients survive, they have poor functional capacity, poor exercise tolerance and low quality of life after hospitalizations. This patch, this new diagnostic tool, could potentially help us prevent hospitalizations and decline in patient status.”

The researchers followed 100 heart failure patients, average age 68, who were diagnosed and treated at four VA hospitals in Salt Lake City, Utah; Houston, Texas; Palo Alto, California; and Gainesville, Florida. After discharge, participants wore an adhesive sensor patch on their chests 24 hours a day for up to three months. The sensor monitored continuous electrocardiogram (ECG) and motion of each subject.

This information was transmitted from the sensor via Bluetooth to a smartphone and then passed on to an analytics platform, developed by PhysIQ, on a secure server, which derived heart rate, heart rhythm, respiratory rate, walking, sleep, body posture and other normal activities. Using artificial intelligence, the analytics established a normal baseline for each patient. When the data deviated from normal, the platform generated an indication that the patient’s heart failure was getting worse.

Overall, the system accurately predicted the impending need for hospitalization more than 80 percent of the time. On average, this prediction occurred 10.4 days before a readmission took place (median 6.5 days).

“There’s a high risk for readmission in the 90 days after initial discharge,” Stehlik says. “If we can decrease this readmission rate through monitoring and early intervention, that’s a big advance. We’re hoping even in patients who might be readmitted that their stays are shorter, and the overall quality of their lives will be better with the help of this technology.”