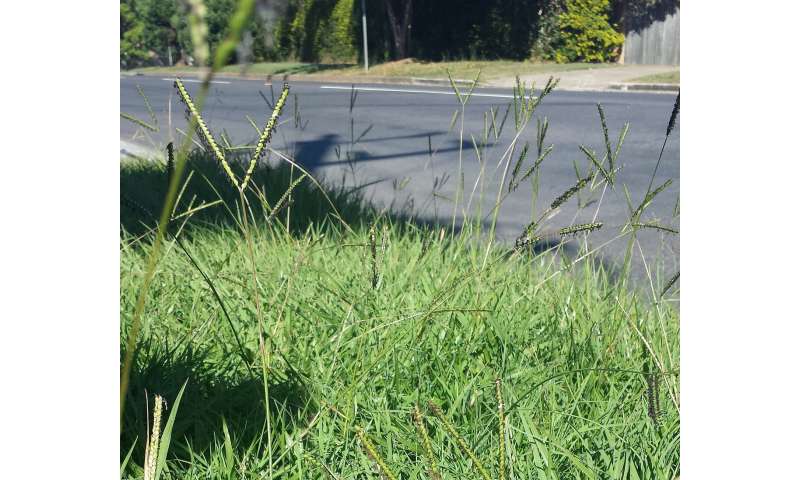 Brisbane’s grass pollen levels over the past two months have been up to four times higher than levels recorded anywhere in Australia since comparative records have been kept, QUT’s Professor Janet Davies told a federal parliamentary inquiry this week.

The head of QUT’s Allergy Research Group and of the AusPollen network, which provides information on pollen concentrations and forecasts, Professor Davies was invited to appear at the Brisbane public hearing of the inquiry into allergies and anaphylaxis being conducted by the House of Representatives Standing Committee on Health, Aged Care and Sport. The inquiry is looking at how better support might be provided to people living with allergies and anaphylaxis.

Professor Davies said that since Christmas Eve, the only days that Brisbane’s pollen concentrations had been low was when there was continuous heavy rain.

“Pollens from flowering grasses are the major outdoor trigger of hayfever and allergic asthma, and these conditions affect the health, wellbeing and productivity of more than 19 percent of Australians,” she said.

“People with hayfever are also susceptible to thunderstorm asthma, a severe episode of which in Victoria in 2016 resulted in 10 deaths and around 10,000 people taken to hospital.

“We have been monitoring pollen levels from the Brisbane site at Rocklea for the past five years, and we also have access to data on pollen levels at the same site in the 1990s for comparison.

“We can see that there has been a shift over the years in the magnitude and timing of the Brisbane pollen season. It is starting later, lasting longer and we are seeing persistently higher pollen concentrations in the air.

“This pollen season has been particularly severe, with the very late wet season delaying the onset, and we expect to be monitoring pollen levels through to May.”

The National Health and Medical Research Council (NHMRC) funded AusPollen Partnership, which began in 2016, has established a standardized pollen monitoring program that now has 25 monitoring sites affiliated with a variety of research projects around the country providing localized daily information during pollen seasons. Available via free smartphone apps and on websites (including www.brisbanepollen.com.au), the information is designed to raise people’s awareness, help them minimize their exposure to grass pollens on high and extreme-risk days, and manage their symptoms.

Professor Davies said there were now more than 1 million people using the AusPollen apps across Brisbane, Melbourne, Sydney and Canberra.

AusPollen researchers are analyzing metrics to understand the frequency with which people access information and also the feedback obtained in more than 4000 responses to a survey of app users.

Professor Davies said people indicated in their responses that the service was useful to help them manage their risk of symptoms, plan activities, decide when to take medications, and to confirm the triggers for their allergies.

“They have said that they valued the pollen information because it made them aware and they also feel that they could safely manage their children with asthma,” she said. These preliminary survey findings support those of a pilot study published in the journal Aerobiologia.

In her submission to the allergies and anaphylaxis parliamentary inquiry and at the public hearing this week, Professor Davies said the NHMRC and other sources of funding that had supported the establishment and growth of the pollen monitoring network would cease mid this year.

While she planned to apply for further research funding to continue the program, she told the committee there was always intense competition for government grants and success could not be guaranteed.

“The dedicated team of research academics across the AusPollen partnership has developed protocols, quality control systems including site audits, sophisticated forecast models and pathways to disseminate the pollen monitoring information,” she said.

“We want to be able to not only sustain the network monitoring infrastructure, but build on it and improve the monitoring service, as well as amplify our knowledge through further research.

“We feel this service to the Australian people to help them manage exposures to allergens shouldn’t rely on research funding. To not have the funding to continue the service would be very disappointing.”