Can a pain-free lunchtime laser blast to the throat banish the curse of snoring?

If you’re sick of enduring sleepless nights thanks to the thunderous sound of a snoring partner, you are not alone. Two thirds of Britons blame their partner’s snoring for their sleepless nights – and on average, suffer 152 disturbed nights a year because of it, according to a recent survey.

But now a new pain-free treatment that targets the throat – and which could even be carried out during a lunch break – is being hailed as a long-awaited solution.

The pain-free procedure uses tiny pulses of laser energy to stiffen and strengthen the back of the mouth – which, its makers claim, can minimise dreaded snoring.

The treatment, which is over in minutes, does not require anaesthetic, meaning patients can get on with their day straight afterwards.

‘It’s a walk-in, walk-out op,’ says Dr Nathan Holt, an aesthetic laser specialist at The Cambridge Laser Clinic, one of the first to offer the procedure. ‘You could have it done in your lunch break.’ 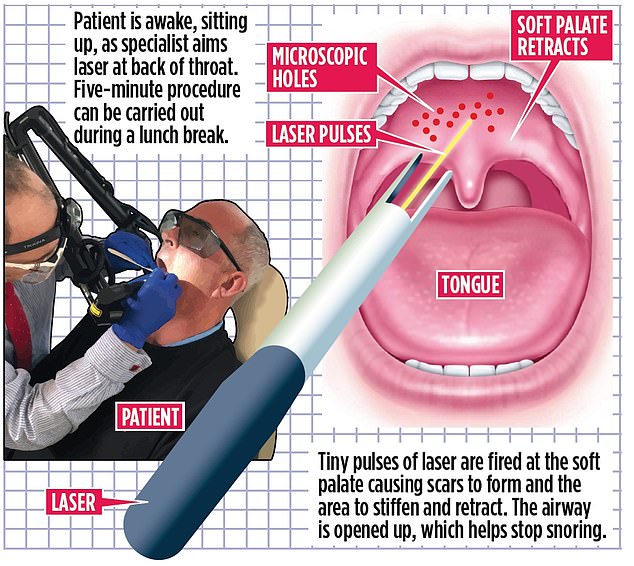 The pain-free procedure uses tiny pulses of laser energy to stiffen and strengthen the back of the mouth – which, its makers claim, can minimise dreaded snoring

The new high-tech laser treatment, called Somnilase, claims to reduce snoring by between 40 and 60 per cent in just a few months.

The procedure is for patients whose snoring is a result of looseness or laxity in the soft palate.

This is the area at the back of the mouth that surrounds the uvula – the dangling part in the middle.

The treatment itself lasts just five to seven minutes. The patient sits upright, leaning back slightly, and their tongue is pressed down.

A handheld laser device is then inserted into the mouth, which emits tiny beams of laser energy. This creates microscopic holes, finer than a human hair, in about a third of the area of the soft palate. The rest is left untreated. This stimulates the healing process, causing scars to form and the area to stiffen.

The noise of snoring is caused by vibrations in the tongue, mouth, throat or airways – which relax during sleep – when we breathe.

The treatment results in the loose tissue vibrating and moving less as the patient breathes while sleeping – stopping the snoring noise.

‘Some people will feel a tiny pin-prick sensation and some feel a slight burning in their throat,’ Dr Holt says. But no anaesthesia is required. ‘People can’t believe how such a simple procedure can deliver such good results.’

Being overweight, drinking too much alcohol, smoking and sleeping on your back can all make snoring more likely – as the airways collapse, interrupting breathing, and leading to the characteristic snorts and splutters.

So, for some, simple lifestyle changes may help nip it in the bud.

GPs can also recommend devices which stop the tongue from blocking the back of the throat, nasal strips which open up the airways and even chin straps to hold the mouth closed. 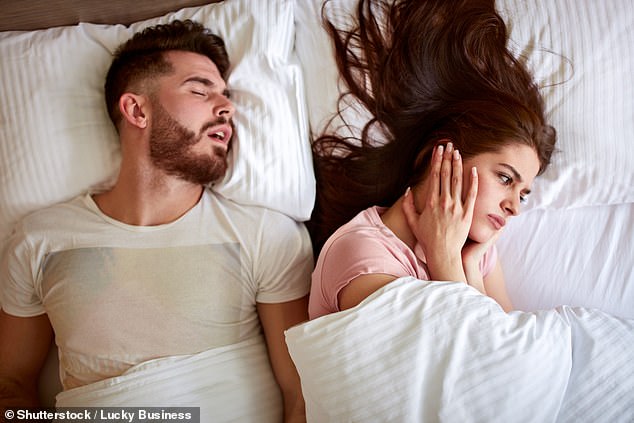 Two thirds of Britons blame their partner’s snoring for their sleepless nights – and on average, suffer 152 disturbed nights a year because of it, according to a recent survey (stock image)

But many patients still don’t get any respite.

There are already operations, carried out under general anaesthetic, to remove the tonsils or parts of the back of the throat that vibrate and cause the noise of snoring.

Radiofrequency ablation, in which the mouth palate and uvula are heated and shrunk, is another popular treatment.

Treatments can cost upward of £2,000. Somnilase involves two to three £750 sessions, a month apart, and a top-up treatment 12 months later for long-lasting results.

Dr Neil Stanley, an independent sleep expert, says: ‘Snoring can be a real problem, disturbing the sleep of both the snorer and their bed partner. It can be a cause of resentment and in some extreme cases even divorce.’

But, he warns, such procedures should be considered with caution.

‘Data shows that this procedure works for a number of people, but most get little – if any – reduction in their snoring.

‘Always consult your GP before considering anything like this.’

One happy customer is Lee Hall, 51, from Maidenhead in Berkshire, who was encouraged to try Somnilase two months ago by his wife.

The married father-of-two has snored throughout their 20 years of marriage and often wakes Deborah, also 51, several times a night.

‘It was extremely bad,’ says Lee, a building company director.

‘She’d try to turn me over, but if that didn’t work, she’d end up in the spare bedroom.’

Lee has so far had two treatments. ‘After the first treatment, I woke up the next day and I felt like I could breathe like I’ve never breathed before,’ he says.

‘It felt like my mouth was about ten times the size. I had my second treatment earlier this week and I’m yet to snore. This will make a huge difference to my life.’

Somnilase is available at The Cambridge Laser Clinic and each session costs £750.