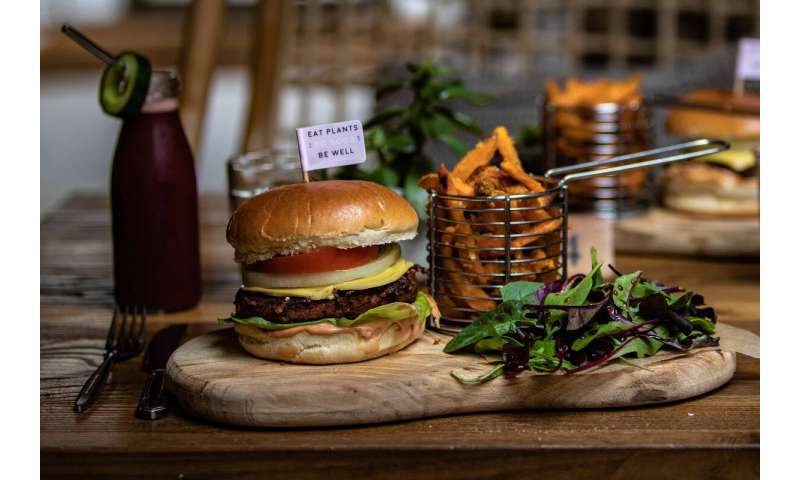 Meaty subjects have been in the news recently, with a series of studies questioning dietary recommendations that we eat less of the red stuff, even as plant-based substitutes have moved into the spotlight with fast-food breakthroughs. A new generation of faux burgers, such as Impossible Burgers and Beyond Meat, which more closely replicate the experience of eating the real thing (they even “bleed”), have been popping up on the menus of chains like Burger King, Subway, and KFC. Scientists re-examining the dietary role of red meat, meanwhile, turned the nation’s nutrition landscape on its head in early October by casting doubt on the conventional wisdom that generally Americans need to eat less of it. Those findings drew a rapid and negative reaction from several quarters, including the American Heart Association, the American Cancer Society, and scientists such as Frank Hu, chairman of the Nutrition Department at the Harvard T.H. Chan School of Public Health. Hu discussed the shifting landscape with the Gazette.

Q: Meat and meat substitutes have been prominent in discussions of diet and health recently. A group of scientists issued guidelines suggesting adults continue their consumption of red and processed meats—the opposite of existing recommendations to cut back. Can you help clear up the confusion?

A: This was indeed very confusing, so I’ll get right to the point. The recent guidelines published in the Annals of Internal Medicine should not change existing recommendations on healthy and balanced eating patterns for the prevention of chronic diseases. Guidance to reduce red and processed meats is based on a large body of evidence indicating that higher consumption of red meat—especially processed red meat—is associated with higher risk of Type 2 diabetes, cardiovascular disease, certain types of cancers, and premature death. While this guidance is supported by both national and international organizations, including the American Heart Association, American Cancer Society, and the World Health Organization, consumers should know that the new guidelines were released by a self-selected panel of 14 members. Furthermore, when my colleagues and I closely reviewed the studies informing the panel’s decision, we saw that their findings contradicted their guidance. In short, the three meta-analyses of observational studies actually confirmed existing evidence on the potential for health benefits when cutting back on red and processed meats. However, because they based their analysis on a measure of three servings of red meat per week, the effects of an individual reducing consumption appeared small. But if you consider that about a third of U.S. adults eat one serving or more of red meat each day, the potential health benefits of reducing consumption become much greater.

Authors of the new guidelines say that existing recommendations to cut back on red meat are based on “low-quality evidence.” How did they reach that conclusion?

Looking at their methods, this is not surprising because they applied an assessment criteria to observational lifestyle research that was developed for evaluating clinical trials, such as those used in drug research. However, we can’t study diet the same way we can a pill. It would be unethical to select individuals and feed them high amounts of red meat over the course of many years to observe the outcome. For this reason, we need to look at research on diet in a more sophisticated way. Criteria have been developed and applied to do just that but the authors didn’t use them. The takeaway here is that nutrition research is complex, and rarely do [its findings] reverse so abruptly. That’s why it’s so important to look beyond the headlines at the quality of the evidence behind the claims. Still, the publication of these new guidelines in such a prominent medical journal is unfortunate as it risks further harm to the credibility of nutrition science, eroding public trust in research as well as the recommendations they ultimately inform.

The panel didn’t consider environmental impact when forming their guidelines. You and Harvard Center for Climate, Health, and the Global Environment Director Gina McCarthy recently noted in a Journal of the American Medical Association (JAMA) Viewpoint that increased sustainability is a potential benefit of the new plant-based meat alternatives. Why is it so important to be concerned about environmental sustainability when making dietary recommendations?

This was certainly a missed opportunity. From a planetary health perspective, already our current production of red meat, particularly beef, stands out for its disproportionate greenhouse-gas emissions in comparison to other foods, especially plant-based foods. Beyond emissions, there is concern that industrial meat production can contaminate our water resources with runoff from animal-waste lagoons. Concerns have also been noted about the welfare of animals raised in these industrial conditions. For those concerned with human health and the health of the planet, these multifaceted issues are alarming in light of projections that the global demand for meat will continue to increase in the coming decades.

Let’s shift gears to the other “meats” making headlines—the new wave of plant-based alternatives, which promise real meat flavor to those who can’t give up burgers. What did you think when you first heard of them? Good dietary development or bad?

My first thought is that these are an interesting application of innovative food technology that may be useful for individuals looking to reduce their intake of red meat and move toward a more plant-based diet. Of course, this is a hypothetical as we have no research as to whether this is a shift consumers will make, and whether such a shift will be transitional or long-term. Furthermore, like any new technology, we must be watchful to ensure that these new products are beneficial to human health as well as the health of the planet, and to understand and consider any unintended consequences.

For products like the Impossible Burger and Beyond Meat to make a difference on global sustainability, they’d have to translate an expensive, high-tech solution to developing and middle-income countries on a massive scale. Is that likely?

We are faced with the unprecedented challenge of feeding a global population slated to reach 10 billion by 2050. When the EAT-Lancet Commission looked at this from both a human and planetary health perspective, they came up with a planetary health diet that would meet nutritional requirements while staying within the confines of our planet’s natural resources. While this shift would require total global consumption of foods such as red meat to decrease by half, all nations are not on an even playing field. North American countries are consuming over six times the amount of red meat recommended by the planetary health diet, while South Asian countries are eating only half the recommended amount. So, while these plant-based analogues may play some role in helping to satisfy the projected desire for burgers and other red meat worldwide, we should be cautious in viewing them—or any single innovation—as a silver bullet. Likewise, we must ensure that they do not distract from necessary efforts to shift our global agricultural system to produce more healthy and sustainable foods, such as fruits, vegetables, nuts, seeds, legumes, and whole grains.

Does a better strategy exist by encouraging people in developing nations to embrace healthy aspects of their traditional diets rather than Western diets?

The research we have on healthy dietary patterns points to an abundance of minimally processed plant foods—vegetables, fruits, whole grains, legumes, and nuts; moderate amounts of dairy products, seafood, and poultry; and lower amounts of processed and red meat, sugar-sweetened foods and beverages, and refined grains. While there are many traditional diets that fit this profile—which should certainly be encouraged—it’s not the case everywhere. Undernutrition and food insecurity remain a burden for those living in many developing countries, so again, it’s important to not only make recommendations for a healthy diet but to create a global food system where it can be achieved.

You point out in the JAMA article on meat alternatives that the plant protein in them is highly processed and that we don’t know if the salutary effects of eating plants is maintained after processing. Why is processing a concern and are there possible analogies to highly processed carbs, which play a role in the obesity and diabetes epidemics?

Indeed, we can’t directly extrapolate existing findings on minimally processed plant-based foods to these products. Food processing is a broad spectrum, but when a food is highly processed it leads to the loss of some nutrients and phytochemicals naturally present in plant foods. It may also lead to the creation of highly-palatable products with high amounts of added sugar, sodium, and unhealthy fats, which can result in excess caloric intake and weight gain. Many highly processed foods are loaded with refined carbs, and others also contain protein isolates and other purified ingredients.

In recent years, we’ve become aware of the potentially major influence of our microbiome on health. Is there concern that there may be unrecognized impacts of these new food products there?

Research is needed to understand how consumption of these novel meat alternatives impact our microbiome. Similar to other highly processed foods, these products rely on purified plant ingredients, and therefore lack much of the fiber and polyphenols found in intact plant foods, which are favored by our healthy gut bacteria. This raises the question as to whether regular consumption of these products could lead to the reduction of healthy bacteria, and as a result, an increase in unhealthy bacteria.

What is the most important thing for the public to know about these products?