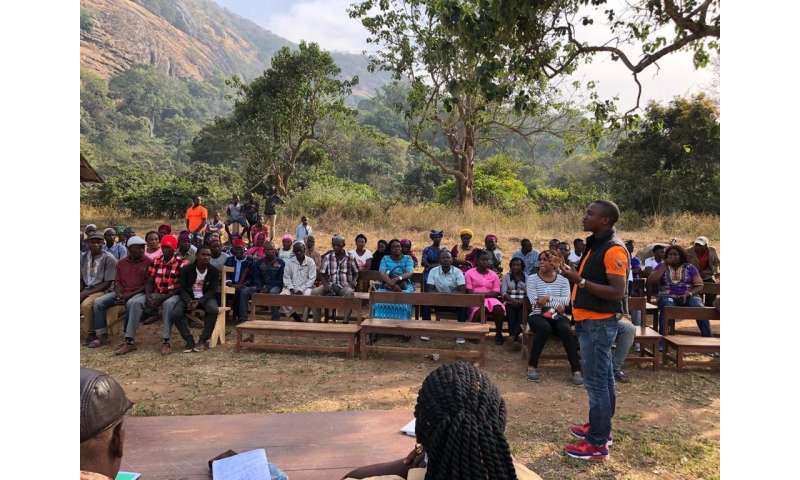 The presence of Marburg virus, a close relative to Ebola virus that also causes hemorrhagic disease in people, was detected in advance of any reported cases of human illness in Sierra Leone. However, the virus’s presence in bats means people who live nearby could be at risk for becoming infected. No outbreaks have been reported to date.

The findings, based on PCR, antibody and virus isolation data, were officially published today in the journal Nature Communications. Preliminary findings were announced earlier in December 2018 to ensure rapid notification to the citizens of Sierra Leone and the international health community.

The paper highlights the value of collaborating with government and key stakeholders across human, animal and environmental sectors to engage at-risk communities about the discovery, address health concerns and communicate risk-reduction strategies before recognized spillovers occur.

Marburg virus was detected by projects led by the Centers for Disease Control and Prevention, the USAID-funded PREDICT project led by the One Health Institute at the UC Davis School of Veterinary Medicine, Njala University, Sierra Leone and the University of Makeni, Sierra Leone.

“Finding Marburg virus in bats in Sierra Leone before any known cases in people is a huge success, as public health officials and doctors can now include Marburg virus among the possible causes when diagnosing hemorrhagic fever cases in the region,” said Tracey Goldstein, co-principal investigator and pathogen detection lead for the PREDICT project from the UC Davis One Health Institute.

To date, there have been 12 known outbreaks of Marburg virus with the most recent in Uganda in 2017. The largest and deadliest outbreak occurred in Angola in 2005 where 227 people died. Five of the new strains identified among the Marburg-positive bats in Sierra Leone were genetically similar to the strain that caused the outbreak in Angola. This is the first time scientists have detected these Angolan-like strains in bats.

The virus-positive bats were all Egyptian rousette bats, the known reservoir for Marburg virus, which primarily feed on fruit. Infected bats shed the virus in their saliva, urine and feces. Egyptian rousette bats are known to test-bite fruits, urinate and defecate where they eat, potentially contaminating fruit or other food sources consumed by other animals or people, particularly children. These bats sometimes serve as a food source for local populations as well. People may be exposed to Marburg virus through bat bites as they catch the bats.

Following the announcement of the preliminary findings by the government of Sierra Leone, the PREDICT team worked with government partners, universities and other key stakeholders to develop and implement evidence-based public health messaging across national, district, and local community levels in Sierra Leone.

Researchers and government officials met with community members to present their findings, answer questions about Marburg virus, and address how to reduce people’s risk of exposure and live safely with bats. As an additional national-level public preparedness measure, Marburg virus disease has been included in testing regimens at national laboratories in Sierra Leone.

“PREDICT opened up the window to show there is more beyond Ebola, and demonstrated the need for partnership well before outbreak events unfold,” said Amara Jambai, deputy minister of health for Sierra Leone.

Scientists emphasize that people should not attempt to kill or eradicate bats in response to the discovery. Bats play important ecological and agricultural roles. Fruit bats pollinate important crops, and insect-eating bats eat thousands of insects each night, including mosquitoes, which helps control pests that transmit disease and damage crops. Killing and coming into direct contact with bats can actually increase the risk of virus transmission, not halt it.

Finding viruses before they find us

The PREDICT team at UC Davis/University of Makeni and the team led by CDC/Njala University both began work in Sierra Leone in 2016 following the massive Ebola outbreak in West Africa. They each sought to discover the Ebola reservoir, the animal that helps maintain the virus in nature by spreading it without getting sick.

This Marburg discovery, the PREDICT team’s discovery of the sixth ebolavirus—Bombali virus—in Angolan and little free-tailed bats in Sierra Leone, and its subsequent finding of Bombali virus in Angolan free-tailed bats in Guinea illustrate the strengths and mission of USAID’s PREDICT project, which is to find viruses before they spill over into humans and become epidemics.