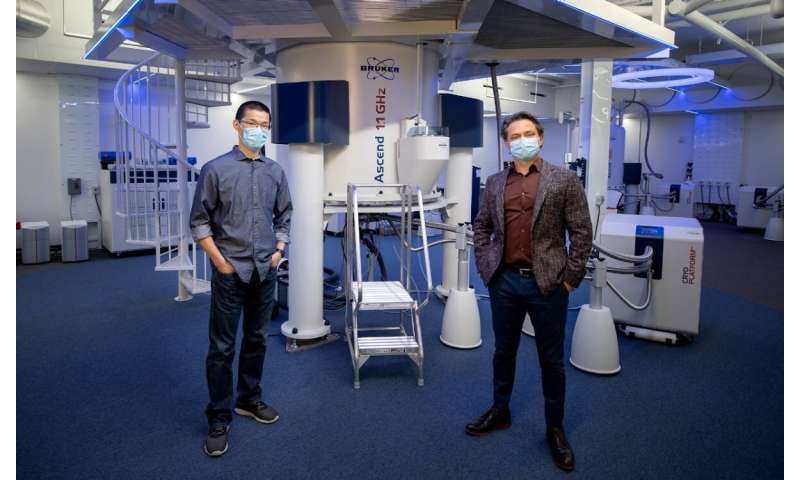 Scientists at St. Jude Children’s Research Hospital have visualized previously unknown structures of the ABL kinase, offering insight for designing the next generation of targeted therapies for adult and childhood cancers. The work will advance understanding of treatment resistance to targeted cancer therapies. The findings appear as an advance online publication today in Science.

Central to this achievement was the United States’ most powerful nuclear magnetic resonance (NMR) spectrometer, which was installed at St. Jude in 2019. Just as microscopes enable scientists to peer inside a cell, NMR spectroscopy lets researchers visualize previously invisible, or undetectable, molecular structures that cannot be seen with other technology.

“This is the first time such fleeting conformations have been captured for any protein kinase, which truly demonstrates how much uncharted territory there is to explore, considering there are more than 500 kinases in humans,” said corresponding author Charalampos Babis Kalodimos, Ph.D., chair of the St. Jude Structural Biology department. “The ABL kinase and its resistance mechanisms have been studied for 20 years, but with this technology, we now have a new place to start for improving targeted therapy.”

A fusion of the BCR and ABL genes fuels cell growth in several forms of cancer, most notably chronic myelogenous leukemia (CML). The first widely used targeted therapy blocked the activity of the BCR-ABL genetic fusion by interfering with the ABL kinase. The drug (imatinib) achieved remarkable success in adults with CML, and it is sometimes used to treat children with acute lymphoblastic leukemia (ALL). But leukemic cells often develop resistance to drugs that target BCR-ABL, and treatment is less effective. Resistance is also a common phenomenon with other targeted therapies.

“Targeted therapies have demonstrated remarkable responses in adults and children whose cancers are driven by a specific genetic event like the BCR-ABL fusion,” said Charles W.M. Roberts, M.D., Ph.D., St. Jude Comprehensive Cancer Center director. “But we know these drugs typically only work for a period of time before resistance happens. This discovery helps us understand how that drug resistance happens and provides information that enables design of better drugs.”

These conformations play an important role in how the kinase is activated and can be hijacked by mutations to convert kinases to oncogenes. By studying the transient structures of the ABL kinase when it is bound to the targeted inhibitor imatinib, the researchers learned more about how resistance to this drug occurs. The findings provide insight into how different states, including inactive ones, can be used to design more selective and possibly more effective inhibitors.