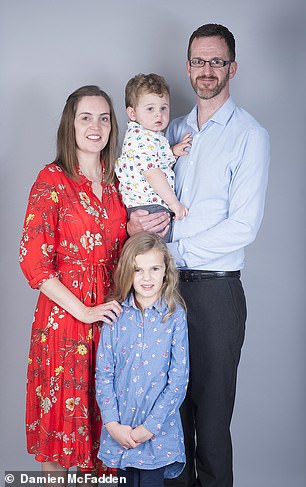 Lisa and Jeremy Norton from Wigston, Leicestershire, with their children Emily and Benjamin

Jeremy and Lisa Norton never take it for granted when they enjoy some rough and tumble time with their 22-month-old son.

Such simple pleasures carry enormous significance for them because were it not for the drastic steps they took to prevent Benjamin becoming the next in a long line of family members to inherit a potentially life-threatening condition, this kind of everyday play would have been too dangerous for him.

Jeremy has Marfan syndrome, a condition where the connective tissue throughout the body is too fragile. As a result, the walls of the aorta — the main artery in the body — can become weakened.

This can result in bulges (known as aneurysms) in the artery that could lead to life-threatening tears.

Heart valves may also be weakened, and sight problems can develop as the lenses are prone to dislocating — the tissues holding them in place are also weak.

Those affected may also suffer chronic pain as the connective tissue around joints is affected; dislocations, injuries and arthritis are common. 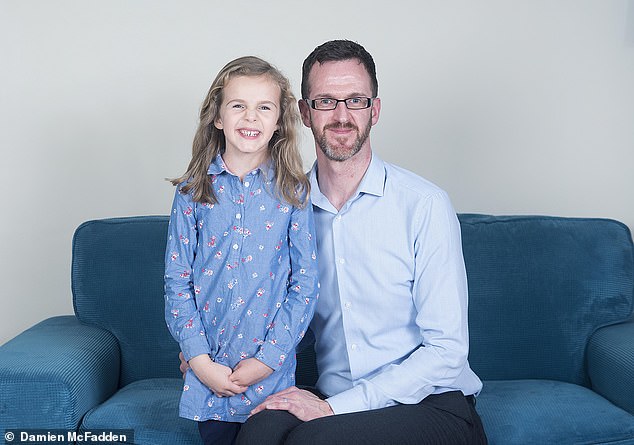 Jeremy inherited the syndrome from his father, who died at 32, and has passed it on to his daughter, Emily, six

People with Marfan’s tend to be taller than normal, again because the connective tissue is fragile and prone to stretch.

Left untreated, it can lead to premature death due to its effects on the aorta and the heart.

Jeremy inherited the syndrome from his father, who died at 32, and has passed it on to his daughter, Emily, six.

So when Jeremy, 35, a civil engineering technician and his wife, Lisa, 35, heard about a pioneering technique to put an end to the condition running through their family, they grabbed the opportunity.

The couple underwent a cycle of IVF and had their embryos genetically tested to see which was clear of the condition. One healthy embryo was implanted and Benjamin was born fit and well in August 2017, free from Marfan’s.

‘To know our son doesn’t have Marfan syndrome is a huge relief,’ says Lisa, an educational learning support assistant, from Wigston in Leicestershire.

‘Not only does this mean we won’t have to worry about the health implications for Benjamin, it means we have found a way of stopping this condition being inherited by a fourth generation of our family if Emily decides she wants to have children. That in itself is nothing short of incredible.’

More than 18,000 people are estimated to have Marfan syndrome in the UK, although it is thought that half are living with the condition undiagnosed.

In 25 per cent of cases, it occurs as a result of a spontaneous mutation in the Marfan gene, which controls the production of fibrillin, one of the fibres in connective tissue. But in 75 per cent of cases Marfan is an inherited disorder.

There is no cure and patients describe it as ‘having a sword over their head and never knowing when it will fall’, says Dr Anne Child, medical director of the Marfan Trust and reader in cardiovascular genetics at St George’s, University of London.

‘Marfan syndrome comes with a lifetime of problems that affect the heart, eyesight and joints,’ she adds. ‘Not only will sufferers need multiple operations — the most common is open heart surgery — children are often teased at school due to their height, and lifestyle is heavily restricted to prevent any undue stress on the body as the connective tissue is more fragile.

‘Although we can treat the condition, we can never predict exactly when their aorta might erupt, so doing pre-implantation genetic diagnosis is a huge step forward,’ Dr Child adds.

The genetic screening technique is available on the NHS for every couple where one carries the Marfan gene, although some only offer this when the mother is under the age of 38.

Professor Simon Fishel, founder and president of CARE Fertility, says demand is growing for genetic testing of embryos for all sorts of inherited conditions.

‘I acknowledge that some people may have concerns and not everyone agrees with this procedure,’ he says. ‘However, I am pleased we live in a society that is respectful of those who do choose to use IVF technology to detect serious conditions at the earliest stage.’

As far as Jeremy is concerned, anything that can reduce the risk of future generations suffering as his family has is a good thing.

‘By the time my father was 25, his aorta was so dilated he needed surgery to strengthen it,’ says Jeremy. ‘But seven years later he suffered an aneurysm and was flown to Germany for specialist surgery to have part of his aorta replaced. Sadly, he died a few days later as it ruptured.’ Jeremy was diagnosed three years later, aged five, on the strength of his physical symptoms such as his height (now, he is 6ft 4in). He was warned against over-exerting himself or taking part in any impact sports or over-stretching to reduce the risk of injury.

Even so, Jeremy’s aorta progressively widened and he underwent open heart surgery at 19 to reinforce a section; he needed a second procedure two years later.

Like Emily he has an uncertain future and will be on a beta blocker and angiotensin receptor drug to slow his heart and reduce further wear and tear on his aorta.

‘We knew from the outset there was a 50 per cent risk of any child we had together inheriting Marfan syndrome,’ says Lisa.

So they weighed up the risks and decided to go ahead. Yet when Emily had a positive blood test to check for the Marfan gene at six months, Lisa admits she was devastated.

‘It was incredibly hard — we’d been warned there was a 50 per cent chance she would have it, but the news still rocks you.’

When she was two, Emily was prescribed beta blockers and will need close monitoring for the rest of her life.

‘Emily will never be able to take part in impact sports or over-exert herself and her eyesight could rapidly deteriorate,’ says Lisa.

‘She is taking it all in her stride now but as a parent you can’t help but worry.’

As the couple discussed having a second baby, they were understandably hesitant. Then, at a routine check-up appointment, Jeremy’s consultant told him preimplantation embryotic testing for Marfan’s had just been approved for NHS funding.

‘To be able to prevent another baby having the condition was just amazing,’ says Jeremy. ‘But that said, there was a part of me that questioned whether we should be interfering with nature.

‘After all, if my Mum had had access to the tests, I probably wouldn’t be here and neither would Emily.’

After ‘many chats’, the couple agreed that although they couldn’t change the past, ‘we could have a positive effect on the future’, says Lisa.

The couple had the screening at CARE Fertility in Nottingham. Lisa underwent a cycle of IVF and once her eggs were extracted and fertilised with Jeremy’s sperm, they were then genetically checked for Marfan syndrome, which is done by examining the DNA from a single cell from the embryo and comparing it to the DNA profile of the parents. Four out of 14 embryos came back clear and viable for implantation.

‘We were warned there was a 3 per cent chance the syndrome could have been missed and I was offered a further test while I was pregnant, but we decided against it as there is a very slight chance of miscarriage,’ says Lisa.

‘When we received the clear test results when Ben was a few months old, it was a bittersweet moment,’ recalls Lisa. ‘We were delighted he was healthy, but there was an element of guilt — knowing that we hadn’t been able to do the same for Emily.

‘But it is a huge comfort knowing that when Emily is old enough to have children, she can, if she chooses, prevent any of her children inheriting the condition. For that, we are incredibly grateful.’