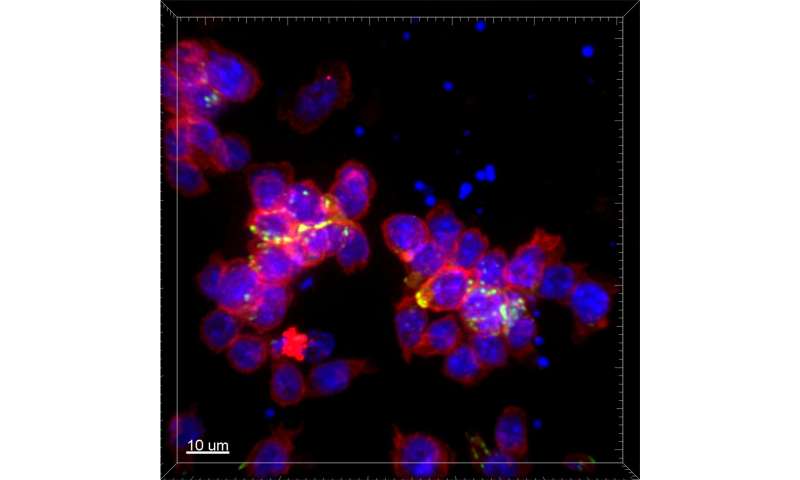 A simple mechanism, previously known from bacteria, ensures that the immune system strikes a balance between the rapid expansion of immune cells and the prevention of an excessive self-damaging reaction after an infection. This has now been deciphered by scientists at the University Hospital of Freiburg (Germany) and colleagues from the Netherlands and Great Britain. An infection quickly activates T-cells, which leads to their proliferation. The research team has now shown that these cells are able to perceive each other and—based on their density—jointly determine whether or not they should continue to proliferate. The newly discovered mechanism could also help to improve cancer immunotherapies. The study was published in the scientific journal Immunity on 11 February 2020.

“We showed that these immune cells perceive and regulate each other. The immune cells act as a team and not as autonomously acting individualists,” said Dr. Jan Rohr, head of the study and scientist at the Centre for Immunodeficiency (CCI) at the University Hospital of Freiburg. “This principle of density control of immune cells is simple and very effective. This makes it reliable and at the same time hopefully accessible for therapeutic approaches,” said Rohr. At low density, the T-cells support each other in their proliferation. As soon as a threshold value of cell density is reached, the mutual support turns into mutual inhibition, which prevents further cell proliferation. This mechanism leads to the efficient amplification of initially weak immune reactions, but is also able to prevent excessive and potentially dangerous immune reactions.

Immunotherapies could become even more effective

This finding casts a new light on certain cancer immunotherapies. Tumors protect themselves by suppressing the immune system. To circumvent this, therapies have been developed in which T-cells are taken from patients, strengthened and expanded in the laboratory, and finally returned to the patient. For these therapies usually high cell counts are administered to make the therapy particularly effective. “It is possible that the immune cells switch off each other if they are administered at high numbers. A repeated administration of lower numbers of immune cells may fight the tumor cells more effectively. ,” says Rohr. The extent to which this might help to improve current immunotherapies will have to be investigated in further studies.