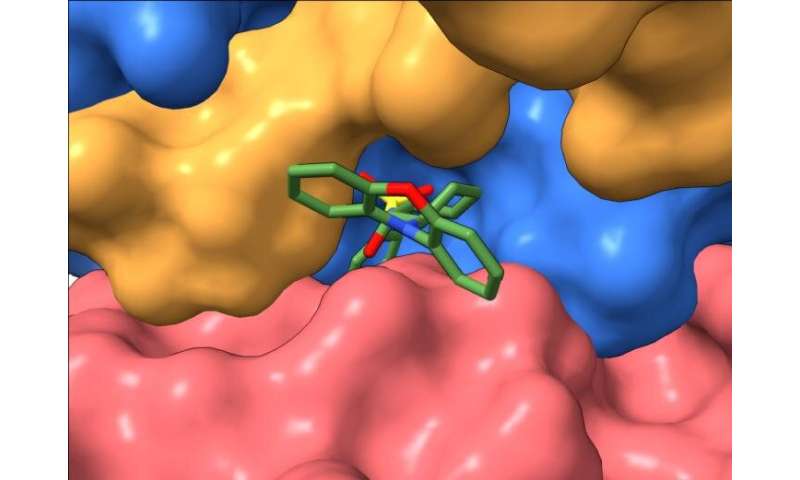 A team of scientists led by the University of Michigan Rogel Cancer Center and Case Comprehensive Cancer Center has identified the binding site where drug compounds could activate a key braking mechanism against the runaway growth of many types of cancer.

The discovery marks a critical step toward developing a potential new class of anti-cancer drugs that enhance the activity of a prevalent family of tumor suppressor proteins, the authors say.

The findings, which appear in the leading life sciences journal Cell, are less a story of what than how.

Scientists have known for a while that certain molecules were capable of increasing the activity of the tumor suppressor protein PP2A, killing cancer cells and shrinking tumors in cell lines and animal models—but without information about the physical site where the molecules interact with the protein, trying to optimize their properties to turn them into actual drugs would require endless trial and error.

“We used cryo-electron microscopy to obtain three-dimensional images of our tool-molecule, DT-061, bound to PP2A,” says study co-senior author Derek Taylor, Ph.D., an associate professor of pharmacology and biochemistry at Case Western Reserve University and member of the Case Comprehensive Cancer Center. “This allowed us to see for the first time precisely how different parts of the protein were brought together and stabilized by the compound. We can now use that information to start developing compounds that could achieve the desired profile, specificity and potency to potentially translate to the clinic.”

Along with cancer, PP2A is also dysregulated in a number of other diseases including cardiovascular and neurodegenerative diseases. And the researchers are optimistic the findings could also open opportunities to develop new medicines against diseases like heart failure and Alzheimer’s as well.

The research required a marriage of scientific disciplines and areas of expertise, notes co-senior author Goutham Narla, M.D., Ph.D., chief of the division of genetic medicine in the department of internal medicine at the U-M Medical School.

“It’s an illustration of how collaboration and team science can solve some of the questions like this that scientists have been asking for many years,” Narla says. “Solving the structure without the biological knowledge of how best to apply it against cancer, would only be half of the story. And if we were just activating PP2A, killing cancer cells and slowing the growth of cancer without the structural data—that would be a really nice half-story as well. But working together, we now have a story about being able to drug this previously undruggable tumor suppressor.”

The study was led by first authors Daniel Leonard, an M.D. and Ph.D. student and member of Narla’s lab when the research was at Case Western Reserve and the Case Comprehensive Cancer Center, and research scientist Wei Huang, Ph.D., of the Taylor lab.

There has been a lot of activity and excitement in recent years around the development of kinase inhibitors—small molecule compounds that go after the protein kinases whose dysfunction is involved in the explosive growth and proliferation of cancer cells. That is, turning off cancer’s “on switch,” Leonard explains.

The new research attacks cancer from the opposite side of the equation, turning on cancer’s “off switch” by stabilizing protein phosphatases whose malfunction removes a key brake on cancer growth.

In the paper, the researchers speculate how a combination of both approaches simultaneously might offer an even more powerful one-two punch—potentially helping to overcome cancer’s ability to evolve to thwart a singular approach.