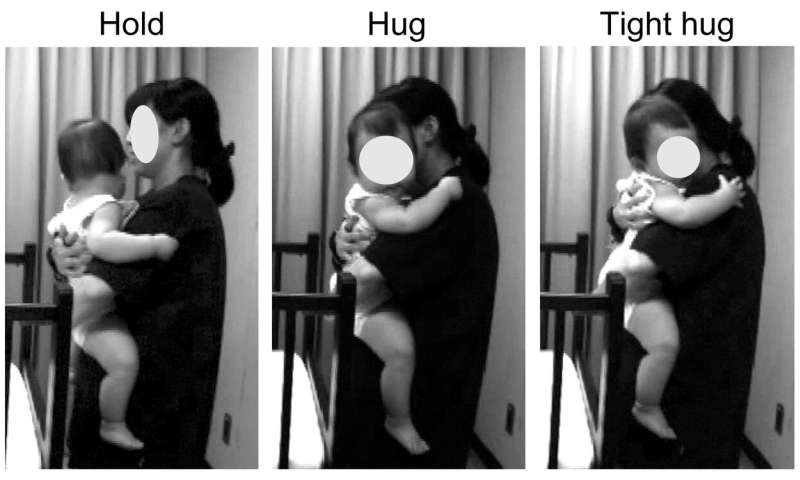 For infants as young as four months, a hug from a parent makes all the difference. A study appearing April 7 in the journal iScience examined heart rate responses in infants less than one year old during a hug and found that children as young as four months experience greater heart rate slowing during a hug than a hold—and during a hug from their parent as compared to a hug from a stranger. The researchers say that the study offers some of the first evidence that hugs play an important role in early bonding between parents and their children.

“Like most parents, we love to hug our children,” says first author Sachine Yoshida of Toho University in Tokyo, Japan. “We also know that children love to be hugged by their parents. But what surprised us as scientists is how little we know about hugging.”

One question was whether a hug was really calming or whether any increase in pressure—for instance, from being held—could be soothing. To begin to explore this in the new study, Yoshida along with Hiromasa Funato and their colleagues examined heart rate responses in infants less than one year during a hold, a hug, and a tight hug. They also looked at what happens when a female stranger did the hugging instead.

The researchers report that parents and infants both showed an increase during a hug in what’s known as the R-R interval (RRI) on an electrocardiogram. The R-R interval is the time between a particular waveform that measures electrical activity of the heart. The increased time indicates a slowed heart rate. 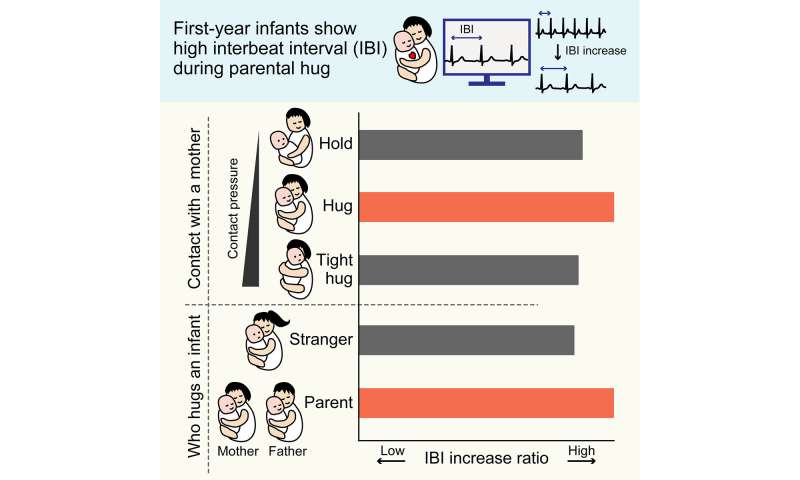 Infants younger than four months didn’t show the same RRI increase during a hug, the researchers reported. But those young infants did show a slowed heart rate when a parent’s hand put pressure on his or her back while being held, suggesting that they didn’t make the same distinction as older infants between being held and being hugged

The researchers say that they had expected a hug would lead to obvious changes in an infant’s behavior, turning a fussy mood into a good one, perhaps. But what surprised them was that the calming effects of a hug that they observed only could be detected on infants who were neither crying nor fussy. “Due to this inconspicuous feature, we think that the experimental data indicating the relaxing effect of a parent-infant hug had been a missing piece for a while, even though there was much situational evidence,” Funato says.